The matching scheme involves a shunt variable cap at the end of the coax feed line, and a series variable cap to the monopole base. The radials are of course connected to the feed line shield.

This type of matching scheme requires that the monopole feed point has sufficient +ve reactance, ie the monopole is longer than resonant. Lets assume the R component of feed point Z is 35Ω.

This scheme incorporates the simple shunt match, and the value of the shunt capacitor can be found knowing the R value to be matched to 50Ω. 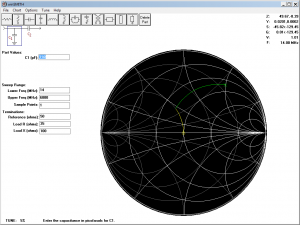 Above is a Smith chart of a model of the match at 14MHz. The monopole has been lengthened to have 100Ω reactance along with 35Ω resistance. In this case a series cap of 148pF and shunt cap of 150pF are required.

The action of the two capacitors is not quite orthogonal on the chart, but sufficiently different that they provide the two dimensional freedom to adjust the complex match value.

This scheme would work on 3.5MHz, but the capacitors will be four times the size and impractical. Capacitors also have issues with weather resistance.

The network above can be simplified by removing the series cap, and adjusting the antenna length for the appropriate series reactance. Although less convenient, it uses one less capacitor.

The value of the shunt inductance depends on the R value to be transformed to 50Ω. 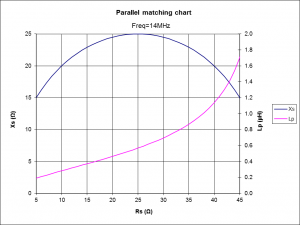 The chart above shows the shunt inductor required to transform feed point R to 50Ω. In this example where R=35, 0.88µH is required. The chart also shows that the feed point needs a series reactance of -23Ω. 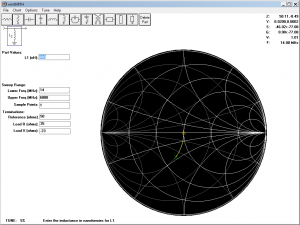 The shunt inductor is usually more practical, it is easier to make weather resistance, is made from materials that are easily obtained and is adjusted by squeezing turns. The match components are quite easy to design if the feed point impedance of the monopole is measured.

The solution is scaleable to the lower bands, in this case an inductance of 3.5µH would be required at 3.5MHz, for example 10t of 5mm pitch, 50mm coil diameter. It has also found application on loaded mobile verticals.