A correspondent asked about the effect of folding back the ends of a wire dipole. 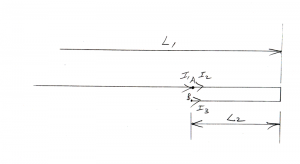 Above, a diagram of the scenario discussed in this article. The dipole of length L1 has its ends turned back by a length of L2.

This explanation is valid where the distance between the top wire and bottom wire in the diagram is very small wrt wavelength.

Currents I1, I2, and I3 are the currents immediately adjacent to points A and B.

Let us explore a variation as an intermediate step.

Points A and B connected

If points A and B are bonded by a short conductor, the current to the right of point A in the upper and lower conductors at equal distances from points A and B are equal (in both magnitude and phase), ie I2=I3, and therefore I1=I2+I3. Stated in terms of differential and common mode current:

Radiation is due to common mode current, and the bonded folded back conductor will have negligible effect on radiating current distribution. The bonded foldback section will accommodate a little more charge and so will have a similar effect to a thicker conductor in the end section, similar to a very very small increase in length L1 (depending on how large is the separation of the conductors).

Points A and B disconnected

Conductor current I3 at the open end B must be zero, and by Kirchoff’s Current Law, current I2 must equal I3, we can determine the common mode and differential mode components of each current I2 and I3.

There is a voltage developed across the points A-B due to Id flowing in the impedance of the short circuit (S/C) stub formed by the foldback section.

For example, if a half wave dipole for 7MHz (ie about 20m in length) had 0.5m turned back, we could calculate Zo of the transmission line section formed by the foldback and the input impedance of the S/C stub. For 2mm diameter insulated wire folded back snug against the other wire, Zo would be around 100Ω and vf around 0.7, and Zin of the stub around 0+j10Ω. Half of this impedance appears in series with the common mode current path at point A, so about 5Ω of inductive reactance. This reactance will reduce the resonant frequency a very small amount, about as much of a coil of similar inductance (~100nH or equivalent to a coil of 2 turns on 20mm diameter).

So again, radiation is due to common mode current, and the bonded folded back conductor will have negligible effect on common mode (radiating) current distribution. The foldback section will insert a very small inductive load in series with the common mode current path, and the foldback section will accommodate a little more charge and so will have a similar effect to a thicker conductor in the end section, both contributing to a very very small increase in effective length.

The structure can be a convenient method for temporary shortening of a dipole. Secure the foldback section with zip ties to keep the wires snug against each other for consistent behaviour. A sheet bend in synthetic rope can be a convenient means of suspending the wire at the U formed, providing support and insulator. If the new tuning is to be made permanent, the actual length required will be greater than L1 by a very small amount, so cut a little long and trim progressively.

Folding wire back snugly for a short distance will very slightly lower the dipole resonant frequency, more so for longer sections or wider spacing.