This article shows some simple means of attachment of a small capacitive load to deploy near the high charge points, and to adjust their effect by moving them to or fro on the main dipole wire. 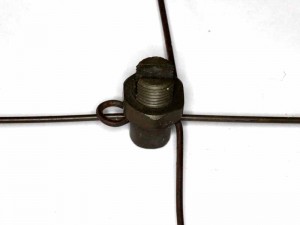 Above is such a device using the smallest size of split bolt line tap. The main dipole wire is the horizontal wire (2mm HDC in this instance) and the cross wire is shaped to be captive in the split bolt so it doesn’t fall out while adjusting the thing. Split bolt line taps should be available from larger electrical contractors suppliers. 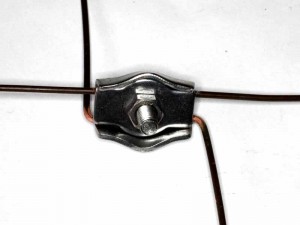 Above is a similar arrangement using a 304 stainless M6 wire grip (eBay for about A$2 each). It is easy to pass the main wire through without deforming it, and the capacitive stinger is bent so it won’t fall while adjusting the position.

It is a good idea to form a largish loop in the end of the stinger wires to reduce the risk of eye injury whilst working on the antenna.

I have used these where the stinger wire is about 0.3m on each side for a 40m dipole, and tuned the main wire so that the adjustable stinger is a metre or two from the end insulator. Fine tuning is then carried out by adjusting the position of the stingers, closer to the end insulators to lower the frequency.