In an attempt to fix up a government orchestrated flawed regulatory and market environment that saw the dominant carrier digging its heels in to regain the right to install infrastructure that it was not required to share with competitors (ie, to allow it to reestablish a monopoly), the Labour government called for tenders from organisations to provide a National Broadband Network on its terms.

No contracts were awarded, government decided the way forward was for it to own the access network, at least for the interim, and so return to the situation that existed prior to the partial privatisation of Telstra in 1997.

In deciding to become the main access network provider, the netco, it was in government’s interests to see existing consumer protection measures vanish, especially since they wanted to transition from the existing providers to itself at minimum cost. Government allowed Telstra, the dominant carrier, to remove speed from the description of their Bigpond services. My advice from the competition regulator was that if speed is not mentioned on the bill, then it is not an enforceable element of contract. Speed is a key characteristic of a broadband service, the very term broadband means high speed, yet it has been eliminated from the service contract to favour government and business.

With Sen Conroy acknowledging the ‘need for speed’ by insisting that Australians needed 100Mb/s access, you might wonder just what percentage of 100Mb/s would be ‘acceptable’ in government’s view as the owner of the monopolist network (monopolist as the agreement with Telstra is that their network will be turned down within 18 months of coverage to premises by NBN).

So, has this had real impact? 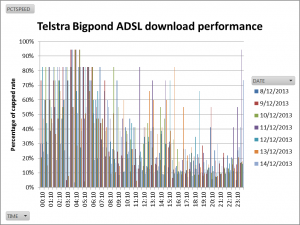 When I moved to these premises just on four years ago, the ADSL(1) service was upgraded to 8Mb/s cap for downstream traffic. The graph above (click on the graphic for a larger image) shows that download speed achieved in a half hourly download test is rarely above 20% of the capped line speed between 08:00 and midnight, and in fact it is frequently below 10%.

In comparison with 56kbps dial-up which used compression which would be likely to achieve close to 200kb/s on the text file use in the tests, the ADSL service is worse much of the time.

The copper part of the network had come in for a lot of criticism from Sen Conroy when he was the minister responsible, but in this case, ADSL statistics show almost zero uncorrected errors, and congestion is not an issue on the copper segment as it is dedicated to the premises service. The congestion is upstream from the DSLAM (the node about 800m down the street), and you guessed it, it is a fibre backbone.

The new Liberal government promised that most subscribers would have 25Mb/s by 2016 (essentially by next election). The new government seems to have been mainly occupied dismantling things done by the last government and reneging on its election promises… an election won on a ‘trust campaign’.

The changes by the new government included a radical shakeup of NBNCo, and no surprises as it had under delivered and those who had access were complaining about achievement of access speed.

This week, the new head of NBNCo, Ziggy Switkowski is quoted in Senate Estimates hearing responding to Sen Conroy (the architect of the debacle) “I do not buy questions that demand us to guarantee anything,” and “It’s clear that after four years of NBN, guarantees have lost currency.”

New minister Turnbull has announced that there will be job cuts at NBNCo as a result of projected lower revenue. That seems more an act of retribution than a plan for providing Australia with an adequate broadband service, and retribution has been the style of the new government.

So, the environment has been transformed so consumers must take what is offered, enforceable consumer service levels no longer exist.

Sen Conroy lead a discussion based on the access technology, telling consumers that they needed fibre to the home (FTTH), and he and NBNCo ran a campaign against copper.

Who cares what technology is used for delivery as long as the service is reliable and has sufficient speed most of the time when consumers want to use it.

A set of meaningful service levels for residential consumers might include a speed requirement expressed in the form of “effective download speed must exceed 80% of contract speed 80% of the time between 06:00 and 23:00 each day”.

Perhaps we need to kick another government out in the hope of timely affordable working solution. Meanwhile we languish as a new government backs away from its promises in the hope that voters will not react against their lies as they did for the previous government’s election lies.