Peter, VK3YE, describes a small transmitting loop (STL) in his video at https://www.youtube.com/watch?v=Cv_RnLpZ9gw. 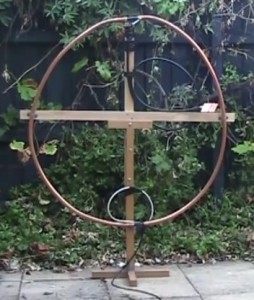 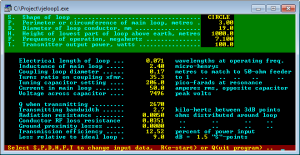 Now behaviour near ground will be a little different, and quite dependent on height and ground parameters. Peter did report VSWR=2 bandwidth equal to 18kHz which corresponds to a half power bandwidth of 25.5kHz (assuming it was perfectly matched at some frequency), Q=279 which is poorer than the model that considered the coax stub loss but ignored ground loss and his PCB capacitor loss. (Common FR-4 PCB dielectric is quite lossy at RF.)

It is difficult to estimate Rrad for the loop close to ground, and the change is Q may be not just due to additional loss resistance, but some change in Rrad (which could be good or bad). It is fair to say that the real antenna is likely to have efficiency somewhere less than 2%, but better than 1% and probably near to 1.3%, or -19dB. 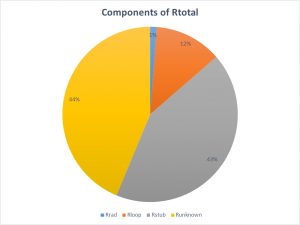 Above is a chart of the components of the total feed point resistance implied by Q=279. As mentioned, Rrad could be higher or lower (see Analysis of a series of NEC-4 models of a low loss small transmitting loop at 7MHz at varying height, Ground effects on small transmitting loop efficiency) and Runknown will include some element due to energy lost in heating soil (again dependent on soil type and loop height), but there is probably still a significant component due to the other PCB tuning capacitor.

Reg’s free space model which considered loop conductor loss alone had an efficiency of -9.0dB, the degradation to -17dB is mostly due to capacitor loss. Capacitors are the Achilles heel of small STL.

By comparison, the efficiency of a good 40m half wave dipole implementation (including practical feedline) should 80% (-1dB) or better, so there is quite a performance cost for the smaller loop size, 3-4 S points in the ham vernacular.