I mentioned at A walk through of a practical application of AIMuhf/AIM900 that I wasn’t all together happy with feed point R at resonance, at 40Ω it was perhaps a touch high for a 2m quarter wave ground plane on a largish vehicle roof.

Repeated measurement of the DC resistance from the coax plug sheild to car body yielded unstable resistance ranging from 1 to 10Ω. If stable low DC resistance is not achieved, this feed line won’t work properly for RF.

The antenna was installed by a commercial installer (Watts Communications) at a time when I was moving house and had all my tools in a shipping container. Sadly, the job has been disappointing as previously I have found that the hole in the roof was off centre by 20mm, and that the coax fouled the seat belt retraction.

Dismantling the base revealed that it did not adequately clamp the braid and this was the probably cause of unreliable shield connection. Grinding a little of the Delrin centre insulator so it properly bottomed against the braid, and reworking the cable termination, the results over some days have been reliably in the low tenths of an ohm range.

That issue solved, it was time for a further scan with the AIMuhf. 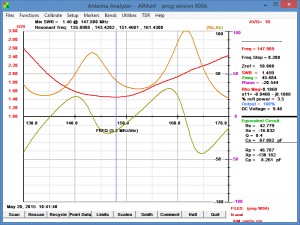 Above is the scan looking into about 4m of RG58. 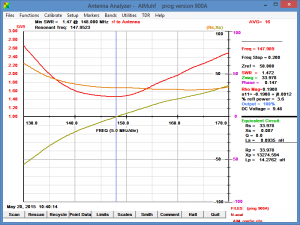 Backing out the effect of the feed line using the Refer to Antenna facility, and tweaking the feed line length so that X passes through zero at the frequency of minimum VSWR (typical behaviour of this type of antenna), the feed point R now appears to be 34Ω which is better than previously indicated.

This process involved a large number of scans, one for the initial measurement and many for the iterative process of finding the exact length of cable to back out. All of this last set of 10 or so measurements were of the same antenna system, the ONLY reason to rerun the measurements was that AIM will not apply the Refer to Antenna transformation to a saved measurement data set (as for instance, Rigexpert’s Antscope does).

This was a particular issue on this occasion as it meant working out in cold drizzly inclement weather much longer than should have been needed.

The inability to apply to Refer to Antenna transformation to a saved measurement data set has an even greater disadvantage when working with an archived data set, or as I often experience, a measurement taken by someone and sent to me for discussion. The AIM system is not conducive to collaboration in this way.

I have owned the AIMuhf for some years, and found so many faults with the software results that I have very low confidence in the suite.I have learned to never rely on AIM without some independent verification. In particular, the Refer to Antenna facility has been severely broken in all versions prior to 900 that I have tested.

I also measured this problem using a Rigexpert AA-600, and the results were close enough to accept the AIM results as sufficiently correct on this occasion.

Problems with lock up of the AIM-AIMuhf link that were evident in AIM900 did not occur during this brief test, perhaps the ‘A’ release address the flaky USB link problem.