This article describes the use of the Array Solutions AIMuhf/AIM900 to test a mobile antenna installation, a quarter wave whip for 2m with about 4m of RG58 cable which has been previously installed and tuned.

The exercise is motivated by a perception that the antenna is not working as well as it should. 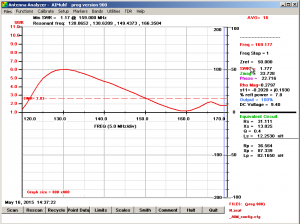 Above is a scan of the VSWR. It indicates problems, there should be a main VSWR dip around the high end of the 2m band (147MHz), but instead the minimum is nearer 160MHz. Clearly there is an antenna connected to the far end of the line in some form (ie the inner conductor is not simply broken), but there could be a high resistance in the inner conductor or shield connection (the latter is common issue with this type of antenna base).

A quick DC test shows that although the base is secured tightly, the cable shield is not connected to the car body. The antenna base was removed, the body contact points cleaned and a little silicone grease applied, then reassembled and tightened for good contact. 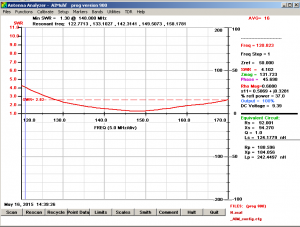 Above, a VSWR sweep after reworking the base, and we seen a classic VSWR curve with minimum at the high end of the 2m band.

As a further check, R,X at the feed point will be evaluated by using AIM’s Refer to Antenna facility. 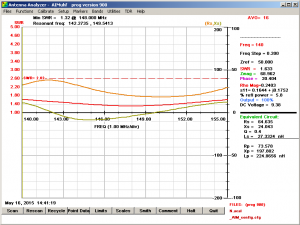 Above is a narrower scan with R,X displayed as well as VSWR.

The value of R,X at the cable connector is not of immediate interest, and since the antenna is not a perfect match, there will be some impedance transformation on the cable. 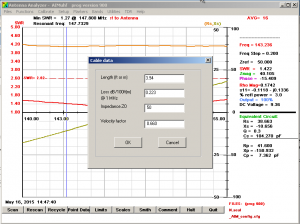 Above, the cable parameters. Note that only one attenuation constant is collected so this probably models conductor loss only and ignores dielectric loss.

As mentioned, the cable is about 4m of RG58. In practice, backing out the cable effects is very sensitive to length, and with this type of antenna, it is reasonable to assume that at the feed point, minimum VSWR coincides with X passing through zero… so the length was trimmed until the measurement showed X pass through zero at the frequency of minimum VSWR.

Above is the result of the adjusted scan. We can see that feed point R is around 40Ω, quite in the range expected for a quarter wave on a car roof (though possibly a little high… to be rechecked over the coming days).

This process involved a large number of scans, one for the initial measurement and many for the iterative process of finding the exact length of cable to back out. All of this last set of 10 or so measurements were of the same antenna system, the ONLY reason to rerun the measurements was that AIM will not apply the Refer to Antenna transformation to a saved measurement data set (as for instance, Rigexpert’s Antscope does).

This was a particular issue on this occasion as it meant working out in cold drizzly inclement weather much longer than should have been needed.

The inability to apply to Refer to Antenna transformation to a saved measurement data set has an even greater disadvantage when working with an archived data set, or as I often experience, a measurement taken by someone and sent to me for discussion. The AIM system is not conducive to collaboration in this way.

I have owned the AIMuhf for some years, and found so many faults with the software results that I have very low confidence in the suite.I have learned to never rely on AIM without some independent verification. In particular, the Refer to Antenna facility has been severely broken in all versions prior to 900 that I have tested.

I also measured this problem using a Rigexpert AA-600, and the results were close enough to accept the AIM results as sufficiently correct on this occasion.

On this occasion, the AIM-AIMuhf link locked up a few times and required closing and reopening the AIM software. This is a problem I have not experienced in earlier versions of the AIM software, so flaky USB link appears to be a new ‘feature’. Hopefully this will be addressed in an ‘A’ release which so often follows a week or two after a production software release.