Since then, AIM885A was released and it had problems as mentioned at AIM 885A produces internally inconsistent results.

The developer advised on his support forum I’m sorry but version 885A has some problems. I’m working an update. In the meantime use the mature version AIM_865A.

Today, he posted a link to AIM885Gx (a declared beta release which presumably fixes problems in the pulled versions AIM882, AIM885, and AIM885A). 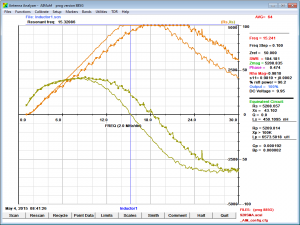 Above is a scan of the test inductor under AIM885Gx and the measurement of the same inductor using AIM865A is overlaid with circles on the plot.

Clearly there are significant differences, both versions cannot be correct and the question remains whether even one of them is correct, or which one is ‘more correct / less wrong’.

You might form the view that the most recent version would be the best, but history shows that is not the case with this developer.