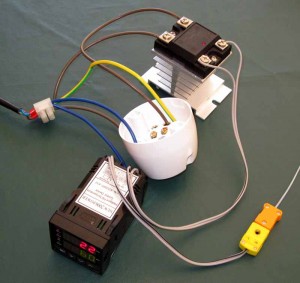 Above, the controller in a minimal test harness using a Type K Thermocouple for temperature sensing and 40A SSR mounted on a heatsink. (The SSR output should be protected with an MOV for inductive loads.) 480VAC 40A SSRs sell for as little as A$5 on eBay.

Initial checkout was done using a load of a small electric frypan (thermostat set to max) containing 1 litre of water and the thermocouple clipped to sense temperature in the centre of the pan (away from the element).

The main objective was to evaluate the “autotune” feature and observe resulting control loop performance. For this purpose, SV=60.

After autotune, PID parameters were:

The loop was stable and held temperature to within 1° with no external stimulus.  The LED on the SSR indicated it was varying power input even though there was no visible change in indicated temperature (rounded to 1°).

When a load was added to the water, the system responded quickly without oscillating and increased power input to correct the drop in temperature, total excursion for a moderate load was within +/- 2°.