In the common theme of one step forward, two steps backwards, this version produces error popups when started. 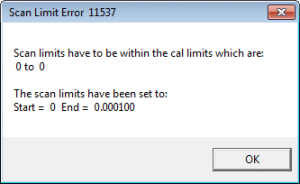 The above popup appears twice when starting AIM885A. Just another symptom to undermine confidence in the system. It doesn’t make sense to me, and the program appears to otherwise start and run.

This problem would seem to some extent to be caused by the lack of a professional Windows installation package that facilitates ordered upgrade from one version to another.

It still exhibits the defects commented upon at AIM 885 produces internally inconsistent results.

Update 23/04/2015: On his forum, the developer advises I’m sorry but version 885A has some problems. I’m working an update. In the meantime use the mature version AIM_865A. In my tests, AIM_865A is seriously flawed (AIM 865A produces inconsistent / incorrect results and several other articles) so it is not really a solution.