I don’t know if there is a totally effective solution for tree leaves blocking gutters… but here is another attempt.

The gutters on this properly are Colourbond steel, and they used 100x50mm steel downpipes to an adapter at ground level to 90mm PVC. The design issues are that the flat bottomed gutter is not self cleaning, the internal gutter clips cause blockages by catching large leaves and twigs, and the downpipe spout size is small and blocks easily. The implementation was poor as the mitre corners in the downpipe were obstructed and block up with leaves that do make it into the downpipe.

Wire strainers were tried on the downpipe spout to stop leaves getting into the downpipe, but they blocked and were an ongoing maintenance burden.

Once the flow in gutters is reduced, they block up very quickly.

Attempting a minimal rework consistent with a good chance of being effective, leafeaters were fitted. The leafeaters use a much larger gutter spout so most leaves fall though the spout onto the leafeater strainer which is self cleaning to a large extent. 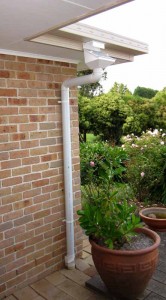 Like the steel downpipe, the PVC is not glued into the ground adapter.

Enlarging the existing gutter spout in-situ could be a difficult job. There is no room to work with tin snips. 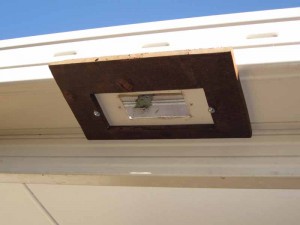 A template was cut from thick hardboard, and screwed to the gutter with 3mm screws. The screw holes are those that will be used to fix the new PVC spout (and so the template is also used to drill the holes in the spout). The internal opening in the template is 4.5mm larger than the required gutter opening to suit the nibbler head. The hole was then opened using an air nibbler.

The spout had sealant added, and fixed with 3.2mm pop rivets from above (a M3 stainless washer added to the underside before setting the rivet provides good bearing area for the rivet in compression). Silicone should be smoothed over the top side of the rivets to seal them. 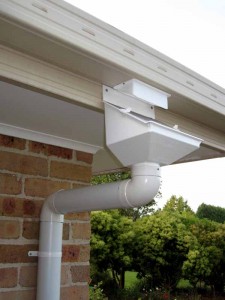 Above, the leafeater and spout installed. Leaves are more like to drop though the larger opening and fall onto the screen, from where they are likely to be washed away by rainwater, blown away when dry, or in the worse case brushed away during maintenance.

The leafeater is fitted to the colourbond fascia with #8x22mm self drilling stainless screws with square drive pan head.

The downpipes will be cleaned of ink and  painted to match the gutters.