I explained that feeding at the current maximum may provide sub-optimal performance on the popular T-match ATU as its losses tend to be worst with low R loads, aggravated by the use of 4:1 baluns for even lower R.

On the other hand, feeding at a voltage maximum might exceed the ATU’s voltage capacity, or perhaps be outside of the matching range of the ATU.

Well if neither of these is optimal in all cases, what about half way between. It has been done, the odd eighths wave feed line on an 80m half wave is another of the recipes you will hear.

Lets explore the options of a half wave dipole at 3.6MHz with four different feed line lengths (Wireman 551).

Above is a table of the impedance (R,X) seen by the ATU, ATU loss and peak output and capacitor voltages for a half wave dipole resonant at 3.6MHz.

If you are using a voltage balun (or an ATU with internal voltage balun), all options except 180° expose the balun to high differential voltage which typically drives high balun loss. If you MUST use a voltage balun, the current maximum feed (or very near to it) is probably the best option for you.

An ideal 4:1 voltage balun in combination with 180° feed line would deliver a load of 14+j0 to the ATU, and ATU dissipation would be 52W with 300W input. It is unlikely that this type of ATU could sustain average dissipation anywhere near that value.

If you use an effective 1:1 current balun, you are not locked in to any of the options to drive good performance, though 1/8 wave (45°) is significantly better than 3/8 wave (135°) which questions the odd eighth wave recipe mentioned.

(Duffy 2010b) simulated a typical 300W class T-match with switched inductor, calculating the loss at a range of VSWR and a range of ATU locations wrt a voltage maximum. 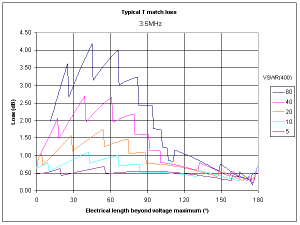 The steps are a result of using a stepped inductor which results in sub-optimal matches for some load conditions. 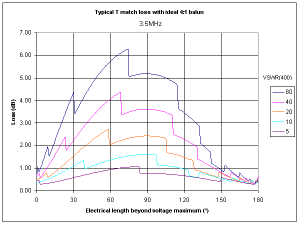 Above, losses are worse when an ideal 4:1 balun is interposed.

Locating the ATU at the current maximum (90° on the graph) does not deliver lowest ATU loss, more so in the case using the 4:1 balun.

Comments on the model

The article makes observations about the application of an ATU typical of the 300W class of T-match. The model makes some assumptions about capacitor values (250pF max), component Q, and continuously variable inductor, and that optimum match is found. Some ATUs in this class have smaller capacitors (eg MFJ-949E) which will drive higher voltages in some instances. Stepped inductors may result in sub-optimal values that may result in higher losses and higher voltages (Duffy 2010). Balun loss and transformation are ignored.

T-match performance is likely to be worse on lower frequencies, and better on higher frequencies, it is the nature of the networks and practical component behaviour.

The model is hypothetical and simple, but it gives some insight into the complex interaction of system components.