(Trask 2005b) describes a circuit at Figure 7 which the author describes as a 1:1 current balun though he does not actually define or reference a definition of the term current balun.

There is no standardised definition of  current balun , I will use the meaning explained at Definition: Current Balun, Voltage Balun. From that article:

An ideal current balun delivers currents that are equal in magnitude and opposite in phase.

A good current balun will approach the ideal condition. It will deliver approximately equal currents with approximately opposite phase, irrespective of the load impedance (including symmetry).

Common mode current will be small.

If the load impedance is not symmetric, then the voltages at each output terminal will not be equal in magnitude and opposite in phase.

Trask does give a meaning to the term current balun in an earlier document (Trask 2005a), a meaning which is quite consistent with the above: 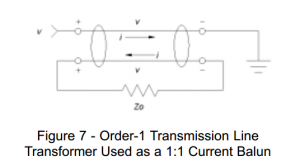 Above is Trask’s schematic of his current balun. Using coax, the lower conductor would usually be the inner conductor, and it is the simpler case to analyse.

The first thing to note in terms of my definition of current balun above is that the currents into and out of the load Zo terminals MUST be equal and opposite, there are no other current flows to/from those terminals. In that sense, there is perfect current balance, but no balun is needed for an isolated load such as this as the currents must balance. Clearly this load is an over simplification of real world loads offered by antenna systems.

Let us add an element of reality, albeit simple, but at least provide a path for common mode current. Let break Zo into two series components Z1 and Z2 and ground the connection between them.

Lets make Z1=Z2=Zo/2 (meaning half the nominal characteristic impedance of the TL) and lets use 0.5m of Belden 8262 coax (RG58C/U). This load is hardly challenging, it is symmetric and equal to his nominated impedance.

We can calculate the common mode impedance without further information. (The impedance of the shield outer surface current path can be seen to appear in shunt with the input terminals and does not affect the common mode current for given input voltage.)

The load component Z2 is transformed by the TL to Z2′, and it appears in series with Z1. The normalised currents in Z1 and Z2 can be calculated, and the sum of them is total Ict, the total common mode current. 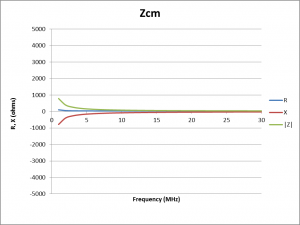 Above is a plot of the calculated values over the frequency range 1-30MHz.

Exploration of this device’s performance on other load impedances, and particularly asymmetric loads show it to be a very poor device for driving equal but opposite currents, it ought not be considered a current balun in terms of the definition given earlier.

The device shares a limitation of the Ruthroff 4:1 voltage balun in that balance is compromised by the phase shift and attenuation of signal travelling through the TL section to one side of the load, more so when there are significant standing waves on the TL section.

Trask also described a 4:1 current balun (Trask 2005a) with the above device as its building blocks, and it inherits the problems of his 1:1 current balun.