I had replaced the electrolytic caps on the backlight inverter. Though the removed ones had good ESR, by the time the module is removed (hardest part to get to in the TV), it isn’t worth putting it back together with old caps, but I didn’t expect the problem was fixed. It wasn’t, the gas discharge lamps had become tired… these things are the Achilles heel of these TVs.

So, we replaced it with a Samsung of about the same screen size. Unfortunately, it is deaf compared to the LG, and reception of digitial TV from Knights Hill, about 25km, was not good enough. One signal could not be received, one was so pixellated so often as to be unusable, the other three pixellated occasionally.

We have another TV which uses a Bush HD STB purchased for about $30 from Woolworth’s, and it receives all channels faultlessly. Likwise, the Topfield DVR works fine.

Looking at the signals on the cable with a Spectrum Analyser, the TV signals were barely visible. Though the Noise Figure of the Spectrum Analyser is not stunning, apparently neither is the new Samsung TV.

A new masthead amp was fitted, a Kingray MHW43FS with 43dB gain and NF<2.5dB on UHF; and a slight rearrangement of the splitting improved the S/N sufficiently to assure reliable reception. Additionally, the existing antenna was replaced by an LP45 antenna (though the antenna by itself made only a few dB difference at the low end). 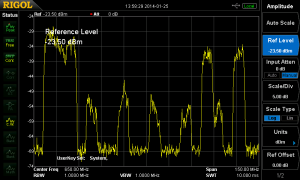 Above, the three signals clustered just below 600MHz, and the two higher signals either side of 700Mhz are now well above the noise. The lower signals are from Bowral, about 5km behind the antenna but much less reliable signals due to rising ground than the more distant Knight’s Hill.

There is a deep dip at about 590MHz, probably a defect of the antenna distribution.

If only there was something worth watching!