It is interesting to reconcile the #52 curves with Fairrite’s datasheets. A simple reconciliation is to compare results at the frequency where µ’ and µ” curves cross over. 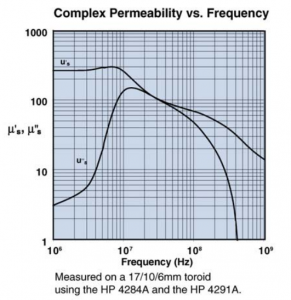 Above is Fairrite’s characteristic curves for their #52. The µ’ and µ” curves cross over at approximately 26MHz (µ’=µ”=114), and any inductor with insignificant self capacitance should exhibit R approximately equal to X at that frequency. 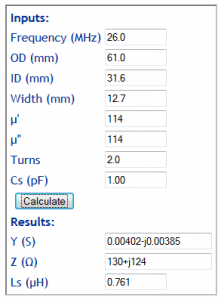 Above is a calculation of impedance based on Fairrite’s datasheet, and including 1pF of equivalent self capacitance. I should note that the model does not allow for the chamfered edges of the core, but the error is quite small. This gives almost equal R and X, the difference is caused by the self capacitance used and shows that the effect is relatively small, insignificant in the scheme of things… validating Steve’s strategy of measuring two turns (provided fixture capacitance is calibrated out).

Note that the effect of very small self capacitance is to increase the R term, so we would expect measurement to give R equal to or very slightly greater than X.

Steve’s graph indicates Z=41+j142Ω at 26MHz, and whilst the X value is 15% higher than expected, the R value is 68% lower than expected. The result is quite the opposite effect of excessive self capacitance and questions the source of the sample, and sample variation.

If the measurements and data reduction are correct, Fairrite’s published data is not a good predictor of the sample core’s behaviour.