At Measuring balun common mode impedance – #2 I mentioned a glitch on the AIMuhf scan that appears to be a defect of the instrument / client software and that it undermines confidence in the system.

The article documents a test of a known load to attempt to prove the measurement system good.

I note though that attempts to SOL calibrate to this test fixture produced a warning no matter how many times the process was tried, connectors cleaned and fastened to specification torque. 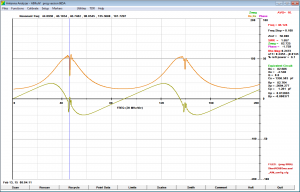 Above is the scan using AIM865A. Note the glitches around 46 and 140MHz, these are artifacts of the measurement system, they are not expected and do not appear on a measurement of the test load using a Rigexpert AA-600. 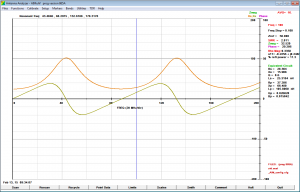 Above is a measurement of the same test load connected to the instrument using a N-M to BNC-F adapter and the instrument SOL calibrated at its N connector. No glitches evident. This scan is consistent with expectation, and with the Rigexpert AA-600 measurement.

The “Refer to antenna” function does not work, though presumably it estimates line loss on an assumption that it is entirely conductor loss and the result of well developed skin effect at 1MHz… both dubious assumptions, and so you might not want to use it far from 1MHz anyway.