I have spent considerable time over the last few weeks trying to salvage something useful and reliable from the wreckage that is AIMuhf and its PC client program AIM.

This was triggered by a correspondent sending me a set of scan files from AIM4770C+AIM882, and my needing to install AIM882 to open them. As it turns out, AIM882 (AIM 882) has a host of problems.

I characterise the environment:

The AIMuhf appears to require at least AIM835, and the latest version AIM882 has serious defects, AIM880 appears to be the root of at least some of those problems.

AIM865 appears to be the most recent version that was simply a defect fix and did not claim to add new features, so it has the potential to be the most suitable version currently available and warrants testing.

Tests of AIM865 have been fairly satisfactory, there are defects but they are small and I can live with them. Importantly, it appears to make reasonably accurate measurements and save them accurately to the .scn and .csv files.

One of the features that just doesn’t seem to work reliably in any version I have tested is smoothing, it figures in a number of the bug fixes, but remains a problem so it seems best avoided altogether. 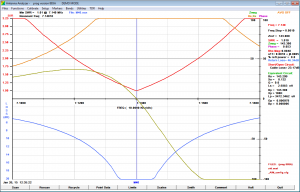 Above, a real test of AIM865 on a real antenna to assess the Q from half power bandwidth, so it has been perfectly matched by adjusting Zref and half power bandwidth (RL=7dB) measured as 7168-7112=56kHz, so Q=127.5. (All of the graph curves shown have defects.)

Since acquiring the AIMuhf, I have saved scans from versions 860 and 862. A bonus seems that AIM865 will open the 860 and 862 saved graphs. Why do I think this is a “bonus”, it should be an expectation that it open ALL previous version saves.

So, the way ahead seems to be to use AIM865 and not upgrade without extensive tests of any new version. In the event of an upgrade, the AIM865 environment must be retained to allow continued access to files saved with it.

Given the ‘one step forwards, two steps backwards’ achievement with AIM882, I do not envisage a need to upgrade from AIM865… but it is possible that I find some important defect in time and may need to consider upgrade.

I regret to advise that I have since discovered serious defects in AIM 865A, see AIM 865A produces inconsistent / incorrect results.