A set of four Skywalker 40A ESCs were purchased for trial on a tricopter (3 on bird, one spare for testing). They cost about $15 ea incl shipping on eBay, and they appear to be genuine Hobbywing product. 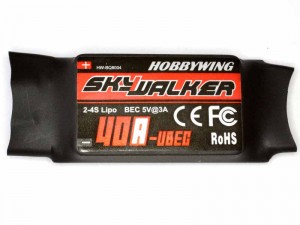 The intention from the outset was to explore BLHeli FW as an alternative to the stock FW. The ESC was chosen based on Steffan Skaug’s evaluation that they had fast FETs and supported BLHeli. 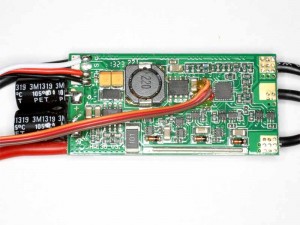 Above is a Skywalker 40A with UBEC modified with longer supply and motor side wires, and a permanent C2 interface cable for programming the MCU. The cable has a JST-SH1.0 connector (purchased as HK 258000026) to plug into the after market Tool Stick clone (HK 289000003). The wires from the top down are orange, NC, brown and red. A small dot of hot melt adhesive is applied after soldering the wires to the PCB pads, and the cable folded down into the adhesive (to prevent fatigue and breakage of wires). The whole thing will be served over by clear heat shrink (left of for better pics). 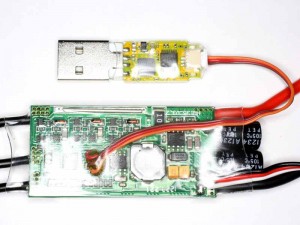 Above the Tool Stick clone connection (see what clear heat shrink serving does for pics).

Tests were conducted at 4S on a HK DT750 motor with 1145SF prop and HK 4822-690kV motor with 1045SF prop. Though these motors are not those to be used on the tricopter, they were tested because they were known to be a little challenging to high performance ESCs. Both of these motors had reported sync issues with some versions of SimonK FW on Atmega8 based ESCs, however they both tested fine on 2013-10-29_8c2cf42_comp_pwm.

Initial tests were positive. BLHeli v11.0 for Multi is more responsive than the stock FW, and under rapid acceleration, the peak current is less. There were no signs of sync loss, operation was always smooth and surprisingly worked from 1000 rpm up to almost 12000 rpm.

The three motors for the tricopter will be modified in the same way and loaded with BLHeli.