What of the Hertzian alternative, a small dipole.

A different issue exists , but somewhat similar in outcome.

Let as take 9A4BZZ Bipole Antenna on 40m as an example for a first level analysis.

Starting with an NEC-4 model of a lossless 1.2m long dipole of 50mm diameter conductor in free space, we find that Radiation Resistance (Rr) is 0.19Ω and feed point reactance is 3474Ω, so inherent Q of a lossless antenna is 18,000, and its half power bandwidth would be 388Hz.

Now the effect of the largish loading coil will be to change the current distribution slightly from the linear taper of a plain short dipole, and that will raise Rr slightly, lets estimate Rr as 0.25Ω.

Mounting the dipole over ground will tend to reduce Rr in most scenarios, lets take Rr for 10m above ground to be 0.19Ω. 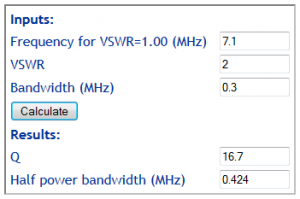 There is nothing in this first pass analysis that would encourage me to try such a short dipole (1.2m) on 40m.

There are significant challenges in making a small but efficient antenna, and bandwidth is sacrificed in achieving that objective. Small antennas with wide bandwidth are usually low efficiency.