At Efficiency and gain of Small Transmitting Loops (STL) I discussed the use of bandwidth measurement of a small transmitting loop (STL) for estimation of efficiency.

Paul Casper (K4HKX) has built a series of STL which he describes on his K4HKX QRZ page.

This article deals with just two of Paul’s loops:

These loops have similar enclosed area.

Paul took a set of careful measurements using his AIM4170C of the feed point impedance of both antennas in the same location (albeit at different but adjacent times). The measurements were made with a short coax lead, and the AIM4170C calibrated to make the reference plane the antenna end of that coax lead so impedance measurements at at the antenna connector.

Measurement was affected by defects in AIM 882 software (AIM 882 produces internally inconsistent results) rendering all displays and presentation in AIM 882 useless for the purpose at hand. I cannot show you any of the AIM graphs as they are garbage.

AIM’s save files were explored as a possible source of raw uncorrupted data.

The same problems were observed in ZPLOTS which depends on AIM’s .CSV export file.

Further examination showed that the .CSV file can be created from the .SCN file (so long as you have an AIM analyser attached), and that it appeared that the .SCN data contained only |Z|, argument(Z) at each observation frequency so an experiment was conducted with a known load and that data appeared valid. AIM 882 produces internally inconsistent results documents failure in calculation of the other columns in the .CSV file, but the |Z| and argument(Z) columns are correct (though units for argument(Z) are changed from radians to degrees). So, a spreadsheet was constructed to calculate Return Loss directly from freq, |Z|, argument(Z) from the .CSV file.

Although the measured antennas were approximately matched for 50Ω, they were better matched to slightly different impedances and these more exact match impedances were used for calculation of Return Loss to get closer to the classic Return Loss curve for bandwidth estimation.

Both antennas were nominally for 40m, but their frequencies of exact match were a little different, so Return Loss for the more exact match was calculated in terms of relative offset from the exact match frequency.

The result of this process is a pair of normalised curves that can be compared on the same chart. 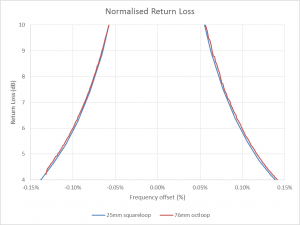 Above is the comparison of the normalised Return Loss (RL) curves. The half power bandwidth is the bandwidth for Return Loss equal to 6.99dB.

Key points in comparing the antennas: 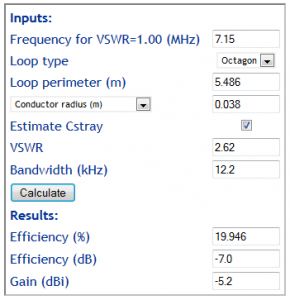 Above, the 76mm loop results.

The efficiency estimate of 20.0%, or -7.0dB reconciles well with Paul’s reported extensive measurements against a half wave dipole using the Reverse Beacon Network. 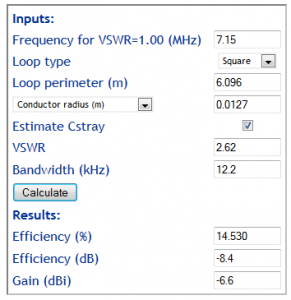 Above, the 25mm loop results.

The efficiency estimate of 14.5%, or -8.4dB is 1.4dB lower than the 76mm loop. Again it reconciles reasonably well with Paul’s reported extensive measurements against a half wave dipole using the Reverse Beacon Network.

An interesting experiment Paul, a quite serious approach to the subject. Thanks for sharing your experience.