Over a long time I have voiced concern at the likely performance at MF / low HF of the very popular windowed ladder lines that use CCS conductors.

A very popular form of commercial ladder line is that using #18 wire, comprised of 19 strands of #31 30% IACS conductivity copper clad steel. The copper cladding on such a conductor is about 14µm in thickness.

This article reports and analyses measurements of a length of Wireman 553 windowed ladder line.

John Oppenheimer (KN5L) sent me a set of measurements he did on a length of Wireman 553 line, and from those I calculated the Matched Line Loss (MLL). All interpretations rely on John’s reported measurements. 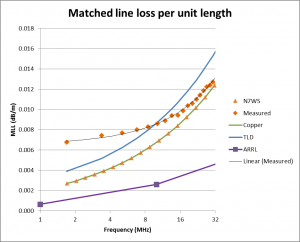 The graph above compares MLL based on John’s measurements with:

It can be seen that below 32MHz, the measured values diverge from the copper and N7WS curves which hints that the assumption of the N7WS and copper models of fully developed skin effect becomes invalid below 30MHz for this line with error increasing as frequency decreases.

TLDetails uses its own algorithms, and in this case is not a good estimator of the measured loss.

The ARRL figures from Antenna Book 21 are way better than the theoretical copper only loss and lack credibility.

Though the actual loss may seem quite low, these lines are commonly operated with standing waves, and loss under those conditions may be much higher than the MLL.

Tools based on invalid assumptions may significantly underestimate the loss in these lines.

John’s measurements demonstrate that assuming well developed copper skin effect on Wireman 553 below 32MHz is not valid, and that losses progressively become worse than a copper based assumption as frequency is decreased.