The article describes a current balun intended for use with an ATU at modest power levels. It is lightweight and well suited to portable operations, and can be made with materials readily available in Australia (LF1260 cores are a little over $1 each in packs of six.)

The design is a variation on (Duffy 2007) which used RG174 coax for the choke to give low Insertion VSWR.

Above, the cores will accommodate four round conductors of diameter 3.2mm, so they will comfortable accommodate the four passes of the twisted conductor of OD 1.5mm per strand or 3.0mm per pair. (For the mathematically minded, the minimum enclosing circle diameter for four equal circles is 1+√2 times the diameter of the smaller circles.) 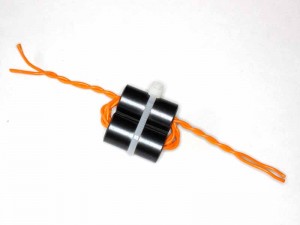 Above, the balun cores located with a piece of double sided foam adhesive tape and a cable tie, and 3.5 turns of twin line wound through the cores. The twin line is made from 0.9mm diameter 7 strand silvered copper conductor with PTFE insulation (OD=1.5mm). The wire has relatively low loss, very tough high temperature insulation and high voltage withstand.

The fabricated twin has a characteristic impedance of 113Ω and vf=0.75. Total length of transmission line on the balun is 420mm. This is not a low Insertion VSWR design, it is a tuner balun. 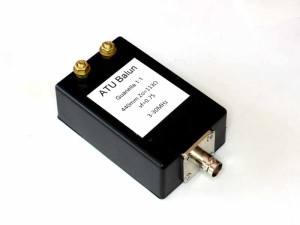 Above, the balun assembled into a small Jiffy box. 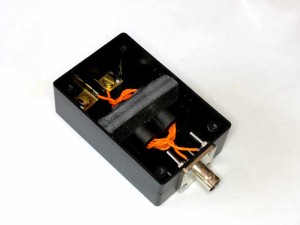 Above is the internal detail.

As discussed at Baluns – show me the numbers, implementation details without quantitative models or measurement is of little value. 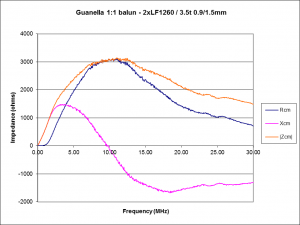 Above is the measured common mode impedance. 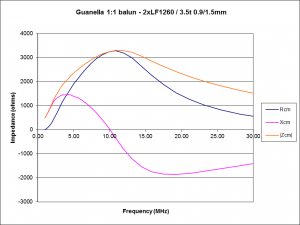 Above is the choke model (Duffy 2012) calibrated to the self resonant frequency of the measured choke. The built choke reconciles very well with the model once calibrated for the measured self capacitance. 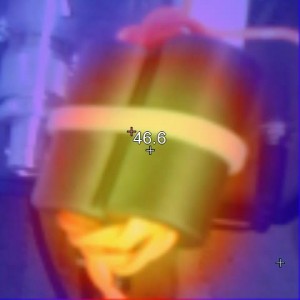 In this case, the unenclosed balun would comfortably withstand 100W average power in the tested antenna system at 7MHz.

Using 100W PEP SSB with compression in normal QSO mode in this scenario results in such a small temperature rise over time that it is not easily measured reliably (<3°).