Alpha antenna refers to the Radcom review of their microtune magnetic loop.

(Nichols 2014) describes the loop as 12.7×3.2mm aluminium flat section formed into an ellipse with average diameter 0.84m. The pictures show that it is close to circular and I will take it to be a circle of perimeter 2.64m.

The review offers some measurements of VSWR=3 bandwidth at the feed point on various bands, and an estimate of efficiency based on RJELOOP1.

Nichols does not give all of the parameters used for the RJELOOP1 model, so the following is based on some interpretation but is intended to give results fairly close to Nichols and conductor diameter has been adjusted to calibrate the model to Nichols efficiency figure of 5.4%. 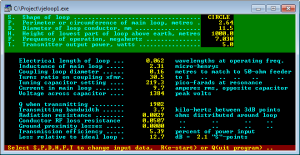 My model are that it is a long way above ground (so negligible ground loss).

Note that RJELOOP1 predicts half power bandwidth as 3.7kHz.

Nichols reports measured VSWR=3 bandwidth to be 25kHz which implies half power bandwidth (VSWR=2.62) to be a little less at 22kHz, but that is 5.9 times the estimate of RJELOOP1.

If we take RJELOOP1’s estimate of the loop reactances as correct, then the observed wider bandwidth implies that the total main loop resistance is 5.9*(0.0029+0.0507)=0.316Ω. If we assume that the radiation resistance estimate is correct, then efficiency then would be 0.0029/0.316=0.92%, substantially lower than Nichols’ suggested 5.4%.

There are many possible explanations for this inconsistency between observed bandwidth and modelled bandwidth, including: 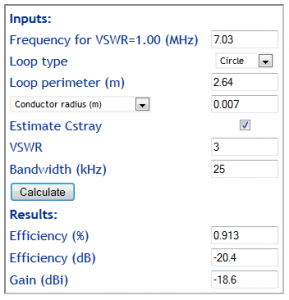 Above, an estimate from Calculate small transmitting loop gain from bandwidth measurement using an estimate of 7mm for equivalent round conductor.

In ham speak, efficiency and so gain is about 3 S-points lower than a reasonably efficient half wave dipole antenna system. Nichols reports 2-3 S-points lower by comparison.

So you might ask, what does Alpha Antennas claim. 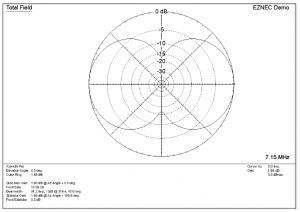 Above is their EZNEC prediction of far field gain. They claim maximum gain of 1.68dBi, an extravagant claim it would seem.