A quotation from Lord Kelvin is most appropriate: When you can measure what you are speaking about, and express it in numbers, you know something about it. But when you cannot measure it, when you cannot express it in numbers, your knowledge is of a meagre and unsatisfactory kind. It may be the beginning of knowledge but you have scarcely in your thoughts advanced to the state of science. 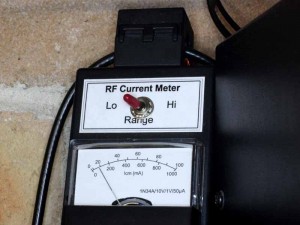 Above, a clip on RF ammeter (Duffy 2011) being used for common mode current measurement.

Note that the common mode current is usually a standing wave, so it must be measured in several places to avoid the error that would result from inadvertently measuring at a null in the standing wave pattern.

As reported at (Duffy 2011), common mode current is rarely measured, and some commercial instruments and published projects for measurring instruments are seriously flawed.

The common mode (Zcm) or choking impedance of a balun is typically frequency dependent, so it must be measured at a large number of points over the frequency range of interest.

Impedance is a complex quantity, it has real and imaginary components and can be expressed in cartesian form as a R,X pair, or in polar form as a magnitude and phase angle.

It is common practice in the ham community to speak of impedance as a scalar quantity like resistance in DC circuits but such a model is incomplete and is not a basis for understanding baluns. Eg K2DC recently helped out with advice on eHam impedance is the square root of the sum of the resistance squared and the reactance squared and, by definition, can only be a positive number, but what he calculates is the magnitude of impedance and ignores the phase angle.

It is rare to find balun manufacturers give impedance plots for their balun, in fact I can think of only one manufacturer and he publishes the magnitude of impedance only. G3TXQ has a comparison chart of a number of baluns he made and measured, but again only the magnitude is shown yet he has argued that the composition of R and X components is important. K9YC also reported measurements of a number of baluns he had constructed and measured, magnitude of impedance only represented as impedance.

To further compound the problem, there is Rule 500. Rule 500 is my term for the Rule of Thumb (RoT) that common mode impedance should be at least 10 times the differential characteristic impedance (Zo) at frequencies of interest. Yes, it treats Zcm as a scalar quantity and in fact there is no simple relationship between Icm and Zo… Rule 500 is simply ROT.

Realise that this connection does not in ANY way simulate the way the common mode choke is used in service, and so the question arises as to whether the measurements are relevant directly or indirectly.

But you cannot reverse the calculation and find a unique value of Zcm, or even |Zcm| (the magitude of Zcm) from the Insertion Loss, there are an infinite set of combinations of R and X making different values of Zcm that would give the same InsertionLoss. (Zcm is not a function of InsertionLoss.)

This test gives a number which is of very limited value.

A VNA can be used to perform this so-called Isolation Test.

It is connected up just like the spectrum analyser + tracking generator case, but this time more information is available.

The VNA provides S11 and S21 values (both complex numbers).

If you simply use the magnitude of S21 (as many people do), then this test is quite equivalent to the spectrum analyser + tracking generator case and essentially a useless number is obtained.

A VNA or an antenna analyser that measures R and X (including the sign of X) can be used to measure the impedance of a common mode choke connected between the analyser’s terminals, or input terminals of the VNA. Whilst some ham grade instruments may be challenged to make good measurements where |Z|>5000Ω, the thing that is of most interest is the frequency range where Zcm is low rather than accurately quantifying a very high impedance peak. 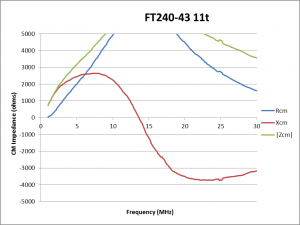 Above is measurement of a common mode choke using a single port VNA (AIMuhf).  Firstly the plot is clipped at 5000Ω because the real question is assessing the frequency range where Zcm is low, and understanding the components of Zcm (Rcm,Xcm). |Zcm| is shown here, not because it is relevant of itself or a good indicator, but to show graphically that it does not reveal the underlying behaviour of the two components Rcm Xcm, and understanding the Xcm characterisic is revealing of the design and possible improvements. 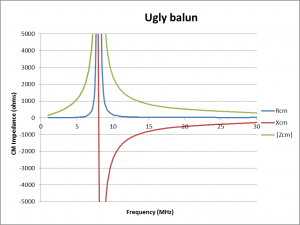 Above is a plot of measured Zcm of a so-called Ugly Balun made to AG6K’s recommendation of 20t single layer of RG58 on a 90mm diameter form. Again, the peak impedance is not of interest, what is of interest low Zcm is in bands other than 30 and 40m. The Xcm curve reveals that this is a high Q resonator and cannot be expected to deliver wide band performance.

Useful metrics of balun performance include:

Sellers and designers do not tend to give useful metrics for their products.

The so-called Isolation Test is essentially worthless, and betrays a lack of fundamental understanding of the balun problem.