But, does that mean that ham folk-lore that it necessarily degrades antenna VSWR bandwidth is soundly based?

The following analysis uses an RLC load that has about the same bandwidth as a well designed Yagi, half power bandwidth is 14MHz, ie antenna Q is 10. This is a medium Q Yagi, and quite representative of a practical narrowband antenna. 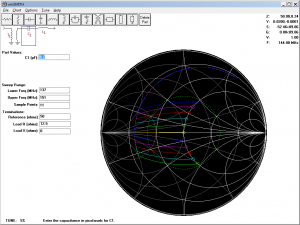 Above is a model of the antenna which has a native feed point impedance of 12.5+j0Ω at mid band, transformed with a lossless 4:1 broadband transformer (2:1 turns ratio in WinSmith). A properly adjusted folded dipole driven element would have this response. Note that the sweep from 137-151MHz is contained within the VSWR=2.62 circle shown. 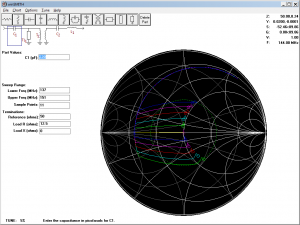 Above, the same antenna transformed with a lossless gamma match consisting of equal tube diameters. The equal tubes result in a 4:1 transformation (again 2:1 turns ratio shown in Winsmith), a shunt s/c stub to represent the gamma ‘loop’ and series capacitor. In this case, all of the sweep from 137-151MHz is contained within the VSWR=2.35 circle shown. 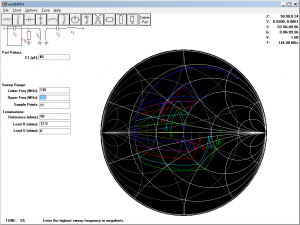 A practical gamma match is not lossless, and practical losses would further increase the bandwidth, but with a good implementation that increase would be insignificant.

The example analysis demonstrates that a gamma match, although regarded as a narrowband transformer, need not reduce the VSWR bandwidth of a narrowband antenna, indeed it may increase it.