To discover how many packets are detected with bad CRC, I installed 6PACK on a TNC. 6PACK reports receive CRC failures which are logged by the Linux kernel. Data was collected for seven hours through the middle of the day to ensure that there was traffic, but that channel utilisation was low. 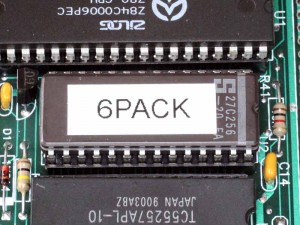 Over seven hours, 1333 packets were successfully decoded, and 364 CRC errors recorded, so total packets were at least 1677, and failures at least 21%.

Interestingly, there was no local traffic, I could hear only two stations, the two prominent digis VK2AMW-1 and VK2RHR-1 which are about 40km from each other.

Average channel load was 240 packets per hour, at say 600ms average channel time per packet, that is a channel utilisation of just 4%.

Now you might not think that collisions between two prominent digis that hear each other so well should be very rare, especially since in this case they both have very long preamble.

It is part of Bob Bruniga’s master plan that this should happen. ( Bruniga 2005) gives advice on setting persistence:

If anyone is doing some testing of the WIDE2-2 and the other WIDE1-1,WIDE2-1 ideas, it is important to turn up the volume and LISTEN. This is because testing what happens under WIDEn-N is much different than normal digipeating.

Ideally, due to the perfect dupe-elimination algorithm in the digis, these packets ONLY radiate outward and never loop back. This combined with the fratricide concept that causes each outward tier of digis to digipeat at the SAME time further eliminates most chances of
hearing anything beyond the first hop.

So in the old days, I could check the path between two digis with a DIGI1,WIDE,DIGI1 path and see my own packet come back and know what digis it got to on the second hop. But with WIDEn-N, you can never hear a loop.

So if you send out a WIDE1-1,WIDE2-1 packet and
hear only one copy, that is the expected result, But you MAY hear a “double” and collisiojn immediately after it as all the surrounding digis at the second tier all respond
at the same time. Most of their users WILL decode it And it will continue outward. But you wont see them decoded.

This fratricide lets a 2 hop path dissipate in two slot times. Without this, then a single 2 hop packet might take 9 or more slot times as each digi politely waits for all the others…
This is NOT desired in the APRS RF network…

Whilst he finishes up “just a thought”, this “packet fratricide” is quoted as Bible and the example UIDIGI configs linked from his web pages are configured to encourage such collisions. The UIDIGI in this test may well be configured in this way.

This is another example where standards and long standing conventions are readily dismissed without serious justification.