This article looks at how significant the Kenwood users are in terms of unique packets reaching APRS-IS, the basis of mapping for most users these days.

The answer is revealed by analysing an APRS-IS feed to count the packets from Kenwood trackers. The following analysis does just that, 5000 records filtered on source VK1 or VK2 were analysed and summarised in the following graph, 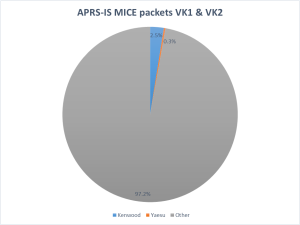 Above, the results of the analysis.

In this sample, Kenwood trackers accounted for just 2.5% of the VK1/VK2 packet sample.

Being so small, that percentage might vary widely if one or two more or less stations were active during the measurement period (which was almost three hours to midday on a Saturday morning in this case).

Though some Kenwood owners are vocal about maximising their utility from the radio, thinking owners recognise that do so at the expense of good position reporting is not in their interest, nor any one elses in the long run.