The following is a recent snapshot of two Australian Tier 2 servers, 98 iGates systems in all. 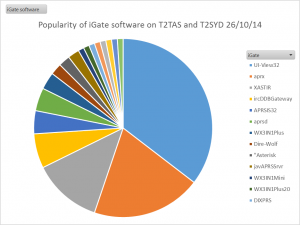 At just over tha third, the most common iGate was UIVIEW32, a WIndows based mapping client with basic iGate and digi facilities that had not had any bug fixes or enhancement for more than a decade (the developer is deceased and source code is unavailable).

Next at almost 20% was aprx, a *nix based iGate and digi (no mapping) in a range of versions, most of which have defects that have been fixed in later releases.

Xastir, *nix based with mapping and digi / igate facilitiies then comes in at 12.5%. Xastir is well known corrupter of APRS-IS submissions, but still very popular.

These three packages, warts and all account for just over two thirds of the 98 nodes connected to these two Tier 2 servers at the time.

APRS is characterised by lack of standards, non compliance with standards and conventions, outdated hardware, outdated firmware, and outdated software all ridden with defects.

As I said at the outset, an indicator of the state of the art of APRS is the systems used for iGates contributing to APRS-IS.