This begs a small Yagi solution.

A number of small designs were optimised using YagiCad, and a 3 element was chosen as it had very good gain for the boom length and a short boom was preferred so that the antenna could be mounted to the side of a mast.

(The awful detail: a gamma match for 14-j90Ω will require equivalent to around 3pF of series capacitance to tune it, and that is at the margin of practicality… possible, but difficult and quite critical in adjustment, quite senstive to temperature variation.)

So the YagiCad model was exported to 4NEC2 and that model optimised for minimum VSWR(12.5). The result had gain of 9.5dB, 0.6dB poorer than the YagiCad design but a whole lot more practical and where impedance transformation losses are considered, a part of the 0.6dB would be clawed back. 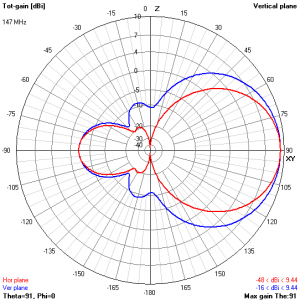 Above, the horizontal and vertical polarisation. The antenna’s reduction of off axis multi path signals which cause fading is its most useful characteristic, on-axis gain is somewhat secondary. 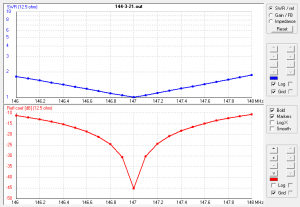 Above, the VSWR plot in blue. (The plot is of VSWR(12.5) for a plain dipole DE and assumes that a 4:1 transformation via an equal diameters folded dipole DE. 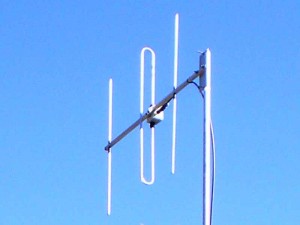 Above, Richard’s construction using 12mm aluminium tube. The DE uses a PVC box with compression cable glands for entry of the ends of the DE, and an N type connector for the coax attachment. Ferrite beads are used to make a W2DU style 1:1 current balun.

The dimensions of the as-built antenna using 12mm diameter aluminium tube are in the table from the NEC model:

The antenna did what was needed. Signals both ways were better and the slow fading diminished greatly.