Above (Britain 2006) is the subject dipole which Britain describes as a partial folded element having a J shape which is grounded at the midpoint of the longest portion of the element. ((Duffy2010b) refers to it as a half folded half wave dipole.)

(Britain 2001) suggests that the dipole in free space has a feed point impedance of 150Ω:

One solution is to use a partial folded J element, having an impedance of 150Ω as the driven element…

However, that portrays a failure to understand how it actually works. 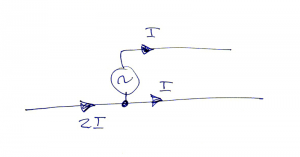 The sketch above shows the current paths at the centre of the W5VJB dipole (conductors all of the same diameter). The current 2I would flow in an ordinary half wave dipole which has a centre feed free space point impedance of around 72Ω, and since only half that current flows from the source shown above for the same total dipole current moment, its load impedance is four times that of a centre fed dipole, or around 288Ω (often rounded to 300Ω).

This is quite the same operation as a gamma match with equal size conductors.

When such a dipole is used to replace a plain dipole driven element in a Yagi where the feed point impedance was around 12.5Ω (as in the W5VJB cheap Yagis), the W5VJB dipole provides a 4:1 impedance step up to 50Ω (Duffy 2010b). 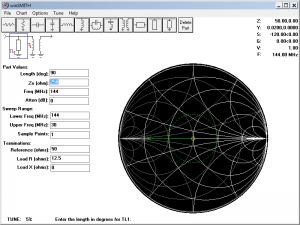 Does it work? Yes, I think so, but I am sure it works differently to W5VJB’s patent explanation.

Is it novel? I don’t think so, it is a specific case of a gamma match, and like all gamma matches, it shares its current division behaviour with a folded dipole.