A BG7TBL FA-3-6G  is a 6GHz frequency counter of the reciprocal counter type, well for Ch1, <=300MHz, at least.) This one was purchased on eBay for just under $300 delivered. 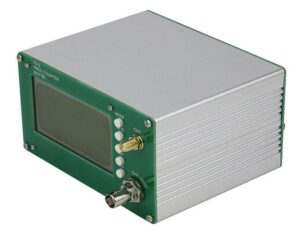 Above is the seller’s pic of the FA-3-6G frequency counter.

It was supplied with a non-compliant Chinese plug pack, it lacks rubber feet, and the nuts on all the BNC connectors were loose, not even hand tight.

It was supplied with no information at all, no user manual, no link to a downloadable English language user manual.

Messages were sent to the seller and to BG7TBL’s support site seeking a manual (well prior to Chinese New Year) and no response was received.

Even leaving negative feedback on eBay has not elicited a user manual, maybe there isn’t one?

First task was to calibrate the counter, it was well off (>20Hz).

There are many ways that the calibration can be done, in this case there is a 10MHz GPSDO clock available on site. 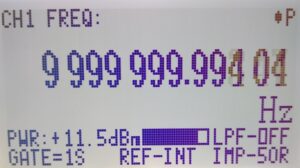 Above, the simplest method is to connected the reference signal to CH1 and adjust the cal pot (on the back) until it reads very close to correct. There is really no point adjusting it to less than 10mHz accuracy, it is unlikely to hold that in the medium term. 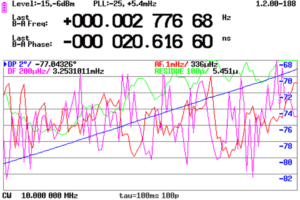 Above, a better method is to compare the counter’s 10MHz reference output with the GPSDO reference using a tinyPFA. The cal pot was adjusted to just a few mHz, again there is no point in going beyond that… especially that as a new oscillator, we might expect significant aging of the crystal over days, weeks and months. 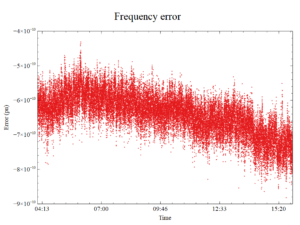 Above is another perspective, the measured frequency reported over the USB serial link was logged for 12h and plotted. 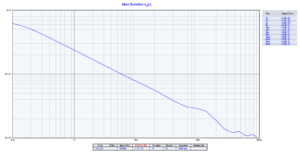 Above is a plot of Allan Deviation taken from measurements using the tinyPFA and TimeLab. 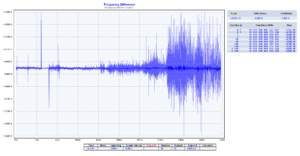 Above, a frequency jitter plot from the same source.

It seems that pressing buttons whilst the meter output is being logged creates some disruption to the measurement process and results in erroneous data written to the log.

First impressions are that it appears to have a very stable internal reference, it can use an external 10MHz reference for better accuracy, and one simple tests it seems to work reliably though it has not been possible to fully exploit its remote capability without a manual.