It seems that the Holy Grail of many ham HF enthusiasts is a “true balanced ATU.”

The word “true” in there bodes poorly!

It seems that while there are plenty of online experts who have very strong opinions on common mode current, baluns and ATUs, it is very rare that we see quantitative evidence of their assertions, measurements even.

Less commonly does a “true balanced ATU” description include valid measurement of common mode current as evidence of operation.

A “true balanced ATU” project by LY1O in unusual in that it contains a probe purported to measure and display current balance. 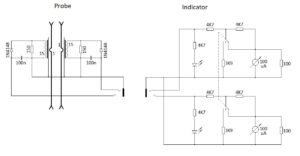 Above is a schematic of LY1O’s measurement system, it has a pair of current transformers each with half wave diode detectors in each leg of ATU output. It is important to note that the detectors convert the RF AC wave into a DC value close to the peak value of the AC wave… so they respond to the magnitude only of the current in each leg.

Above is the display unit showing magnitude of current in each leg.

What is wrong with that?

Well, current balance means equal magnitude and opposite phase in the two legs so that very little external field is produced by such currents in two relatively close parallel wires.

This measurement system does not depend on phase, and whilst it is true that with balanced currents, both meters should read the same, the converse is not true, equal magnitudes of itself is not proof of current balance.

See Instrument approaches that do not reliably indicate current balance for more discussion.