I bought two ISDT Q6 Plus battery chargers over some months, and they both quickly developed the same fault symptoms:

The worst one was disassembled. These are build a bit like mobile phones, the manufacturer did not want them being disassembled.

Here are pics of the evidence of the problem. 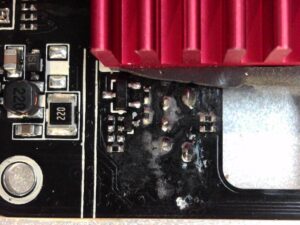 Above is the component side of the PCB, the right hand side is opposite to the rotary encoder for the jog wheel. The PCB around the hand soldered terminals of the encoder has a large amount of flux residue which is usually corrosive to a greater or lesser extent. Over time with atmospheric humidity, this spreads wider and wider, and in this case has penetrated both the encoder and the switch which is to the right of the PCB opening. 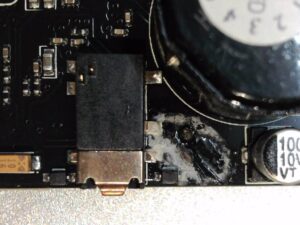 Above is a pic of flux residue / corrosion where the LDR is hand soldered to the board.

This corrosion is a systematic problem, it is about the quality of the flux used for hand soldering.

This is not economically repairable, at a minimum it needs procurement of replacement LDR, encoder and tactile switch, cleaning the PCB and replacement of the parts. There may be other parts affected. 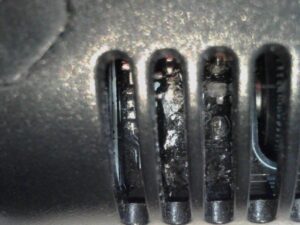 Above, a peek into the second unit shows the same corrosive residue under the rotary encoder. It probably has other instances, certainly the jog switch is unreliable.

These are destined for the bin, there is no point trying to repair them.

It speaks volumes for ISDT who are probably a fabless designer and chose poor quality manufacture.

I don’t see myself risking purchase of any more ISDT product.