A simple transformer model of the Guanella 1:4 balun discussed a simple model for the operation of the device, but a model that is too simple for most RF baluns. Notwithstanding that, it does expose some interesting issues that are not only valid at lower frequencies, but will also be manifest in an RF balun. 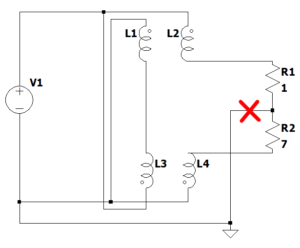 Consider the effect of breaking the connection at the red X, so that we now have  what is often referred to as an “isolated load”.

We can now add another rule to those:

So, the terminal voltages are not balanced, but the currents are balanced (so it is still working properly as a current balun).

Note that a two terminal impedance is a naive representation of many if not most antennas, popular, but a naive over simplification that does not facilitate evaluation of current balance.

A popular practice is to wind all four windings on a single core. This essentially makes the voltage magnitude across L1 equal to that across L3, and in phase or out of phase depending on the winding orientation.

(Sevick 2001) proposed such a configuration, but noted that it only worked well on an “Isolated Load”. An isolated load does not need a balun, the currents must be balanced. This proposition is patent nonsense.

In a practical balun, the current in L1,L3 comprises a component needed to magnetise the core and a component due to load current in L2,L3. If the load current is not much much larger than the magnetising current, the ability of the balun to ‘force’ current balance is compromised. Failure to achieve good current balance would mean that the terminal voltages will not be as they would if currents were balanced.

Note that common mode impedance of a Guanella 1:4 balun is approximately half that of the component baluns (Why the preference for Guanella 1:1 current baluns for HF wire antennas). 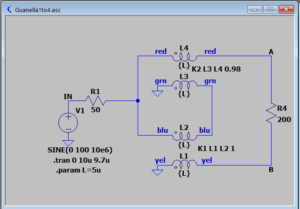 Above is a model posted online to support an assertion about the failure of a Guanella 1:4 balun to perform in a given practical role.

Each of these issues are reason to dismiss conclusions drawn from the model as unreliable.