There are lots of small loop calculators published, and yes, I have added to the number. Most are some form of elaboration of formulas published by (Hart 1986), and given ‘imprimatur’ by ARRL (Straw 2007). These formulas are deeply flawed, see Reconciling W5QJR’s loop formulas.

For that reason, my first step in reviewing any small loop calculator is to look for hints of Hart. 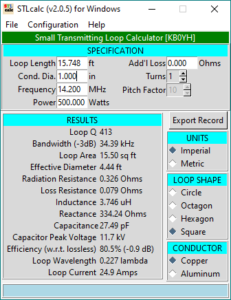 If we add RadiationResistance and LossResistance, we should obtain total antenna feedpoint resistance of 0.405Ω, and calculating \(Q=\frac{X_l}{R}=\frac{334.24}{0.405}=825\) which does not reconcile with his given Q of 413. The “Loop Q” is NOT the Q of the given loop inductance in series with loss resistance and radiation resistance.

The calculated RadiationResistance reconciles with Hart’s formula (See Accuracy of estimation of radiation resistance of small transmitting loops  for further discussion about accuracy for such a large loop.)

There are other obvious issues.

One wonders if the author reconciled the calculator with a built antenna of those characteristics.

Comments relate to the specific version, earlier and later versions may behave differently.

It appears that KB0YH has made changes to STLcalc v2.05x, and Q is calculated differently.