An experimental beacon on 144MHz has been deployed for evaluation. The beacon is designed to permit observation of aircraft enhancement propagation by way of a 200+s unmodulated carrier in each 300s cycle. Ident is by very slow Morse code. Necessary bandwidth (ITU-R SM.1138-3) is just under 5Hz, requiring 5Hz receiver bandwidth for ‘crisp’ decoding under weak signal conditions, but 1Hz receiver bandwidth is better for observing aircraft reflections.

There has been long running argument about whether such propagation paths are reflection from hot gasses behind the aircraft, or reflection from conducting skin on the aircraft. With increasing use of reinforced plastic skins, we may observe different response from similarly sized aircraft, depending on the skin, and these differences may be frequency dependent.

An interesting topic for study.

The oscillator on the keyer can have accuracy as bad as 1000ppm, and a power interruption would cause it to restart at a random time, so the modulation pattern is not syncronised to the wall clock.

The narrow band modulation means it can be decoded in 5Hz receiver bandwidth, allowing decoding with packages such as SpectrumLab some 20dB or more lower than by ear. 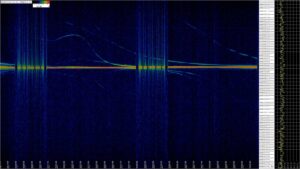 Above is a screenshot from SpectrumLab of a test setup over 200km path. A settings file for SpectrumLab is linked below (though you will probably need to make some tweaks for your own setup).

Under aircraft enhancement, Doppler shift will be seen, possibly multipath reception (as in this example). 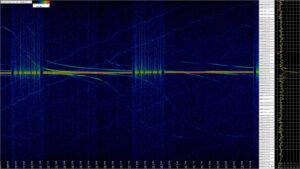 The screenshot above shows several aircraft reflections, the smooth curves, and several jaggy harmonics of a switched mode power supply drifting upwards in frequency with time. Looking closely at the trace with no apparent Doppler shift, and the Doppler shifted traces, at times a pulsation can be seen which is likely the result of multi-path of signals with very small frequency shift wrt each other.

The screenshots here all show a strong direct signal. That might not be the case for longer paths, though the aircraft reflections might be still present at good strength. In these examples, the transmit and receive antennas are directional and point to each other, and most of the traces on quick perusal appear to be forward scatter, but back scatter (which includes ‘side scatter’) are likely and have been observed (identifiable using flightradar24 or similar to compare reflections to aircraft locations).

The transmitter uses a TCXO reference, so should be reasonably accurate over time.

In the first instance, the transmitter is on air by appointment, drop me a line if you would like to look for it.

The Grabber link above may provide some recent off-air screenshots.