The assembled experts on QRZ are commenting / analysing a balun shown on Wikipedia as I write this. 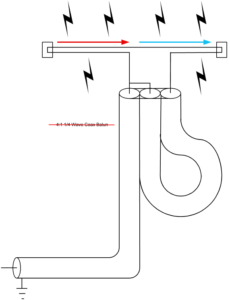 The red strike through is mine, for this to work as a balun, the right hand section of coax MUST be an odd number of half waves electrically (yes, Wikipedia got it wrong).

One commentator opines that is a voltage-mode 1:4 transformer, not a balun at all because it offers no CM suppression. and later from the same author  it cannot be a balun; only a transformer.

So, this view implies that unless the device offers reduction in common mode current, by his definition, it is not a balun.

Another expert opines the primary job of the balun is to minimize the common mode current on the coax, so he is on the same page.

So the impression give is that this half wave balun has not application in reduction of common mode current.

The more emphatic people are, the less confidence we might have in their position.

In fact, this device has been used widely for a very long time, and importantly with very good performance on suitable antennas such as VHF and UHF Yagi antennas… so (how) does it work?

Were the half wave section lossless, then the voltage at one end is exactly the same magnitude but opposite phase as the other end. For low loss, the voltage at one end is almost the same magnitude but approximately opposite phase as the other end. The loss in a half wave of RG58A/U at 144MHz with Zl=100 is less than 0.2dB… so it is not perfect, but you are unlikely to build such a Yagi with symmetry better than that. If you were concerned, you could use lower loss cable, RG213/U would be around 0.07dB loss, RG6/U about the same.

The latter is a desirable outcome with many antenna systems, and the objective referred to by the online experts who dismissed this balun.

It has application on highly symmetric antennas which are quite common, and it is a proven good solution.

The (bad) diagram above shows the three shield ends bonded, but otherwise isolated.

Hams discuss at length whether they should be tied to a Yagi boom for that type of application, and strong opinions are expressed for and against without measurement evidence.

My own practice is to bond the shields to the boom with a very short conductor is consistent with a symmetric system, and it may help to assert symmetry of the antenna by ensuring that the coax shield cannot be at a voltage different to the boom at that point.

A similar question arises about the centre of a beta match (hairpin), bonded to the boom or not? Again, floating it does not compromise symmetry in an ideal system, but bonding it to the boom is consistent with symmetry and provides a simple weather enduring physical support to maintain behaviour.

What types of antennas are likely to be highly symmetric?

As mentioned, VHF and UHF Yagis are likely to be symmetric if well constructed, undamaged, and mounted clear of other conductors, structures, vegetation etc.

HF wire antennas on the other hand are in the very uncertain category, they may be quite symmetric and they may not be. Factors again are proximity to other conductors, structures, vegetation etc, but even the homogeneity of the ground (soil type, moisture content etc) weighs in where the dipole is at relatively low height.

Though G3TXQ thought he dipole was symmetric prior to measurement, the measurement showed that it’s symmetry was quite poor. On the other hand, the second case turned out to be relatively symmetric. Neither are good cases for a voltage balun because of uncertainty with environmental changes (seasonal rainfall variation etc).