Karen purchased a Victa lawnmower many years ago, and it has expired.

Victa was Australian, but now owned by Briggs & Stratton. The engine is different to most two stroke small engines, the notable differences are:

This article describes the service work to get the mower into good working order.

The handle bolts and handwheels don’t work, someone has replaced a cup head bolt with a screw and it does not locate in the tube, so a screwdriver is needed to tighten the handle. The lower bolts are loose and need tightening.

The mower takes a lot of effort to push, the wheels are jammed up with string and stuff binding the bearings.

The blades are beyond service life, chipped and blunt, and the blade carrier and mower base are caked with wet decaying grass clippings.

This is an air cooled engine, and the cooling fins and cooling fan were caked with oily grass / dust residue. This leads to higher operating temperature, shorter engine life, and performance problems. 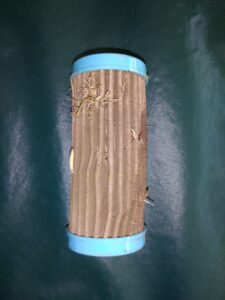 Above, the air filter is filthy and will cause rich running which results in carbon build up in the combustion chamber and blocked muffler. 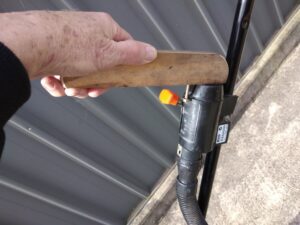 The excuse offered for the dirty air filter is that it is very hard to remove the air filter cover… and that is a fair point. The tool above is fashioned from a piece of pine and a roofing screw, and it make levering the cap off in a controlled way very easy. 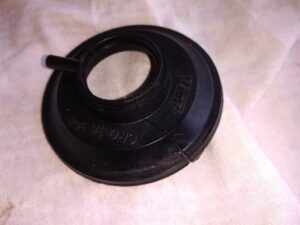 Above, the end cover of the carburettor was loose, and the complaint was that it would not clip on. The thing is cracked, probably from abuse when trying to clip it on. 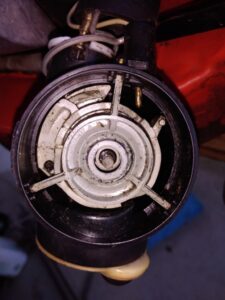 Above. the inside of the carburettor was filthy, and this should be fed only by filtered air from the air filter / snorkel assembly. Proof the engine has been run with no air filter, or the snorkel ajar. 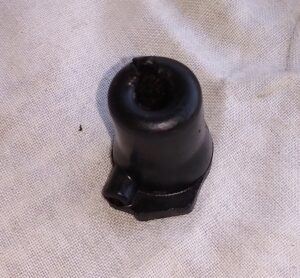 Above, the kill switch boot is torn. 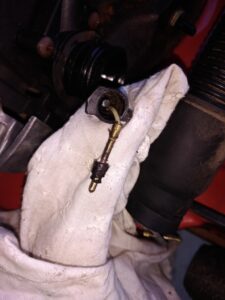 Above, the kill switch rubber tip is damaged, half of it missing and not loose inside the carburettor body, so someone has assembled it like this. 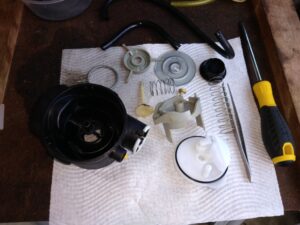 Above, the parts washed and laid out, some parts are from the service kit (eg float chamber cover, float, needle, o-ring.

The throttle cable had been bent a little at the carburettor end, straightened. There is a technique to inserting the throttle cable and locking it into the body by lowering the throttle lever, then fixing the snorkel hose to keep in all in place. It is actually a clever design… if you understand how it works and follow the correct procedure for installing the cable. 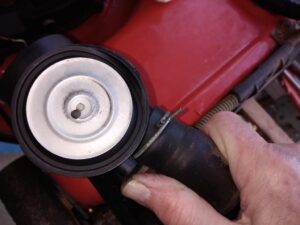 Above, a new governor diaphragm mis-fitted… it is really important to make sure that the diaphragm is seated properly all the way round, not tucked in as in this case as it will not seal and the engine will over-speed.

The other important thing before clipping the cover on at this point is the position of the poppet valve, C in this engine to the jet notch.

The new needle and seat were pressure tested, pop-off pressure was 10kPa (equivalent to about 0.8m of petrol)… quite typical of small engine carburettors designed for gravity feed. 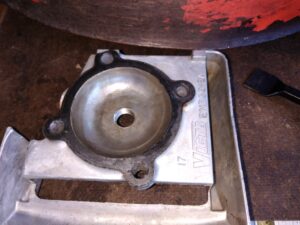 Unsurprisingly, the head and piston were carboned up, so the head was cleaned and wire brushed to remove carbon deposits. 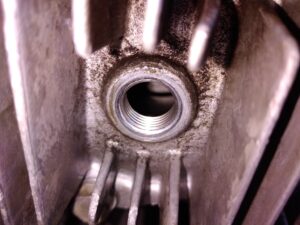 Above, the spark plug thread had minor damage so it was fitted with a helicoil insert. New spark plug fitted. 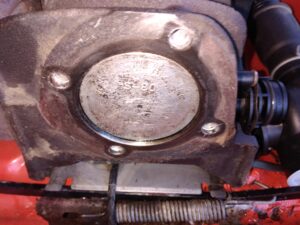 Above, the piston top was scraped and wire brushed to remove carbon deposits. 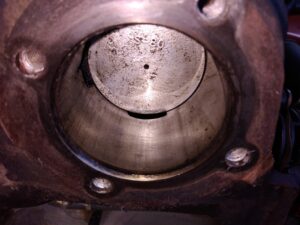 Above, the bore shows minor scoring, and minor side play on the piston in the bore. 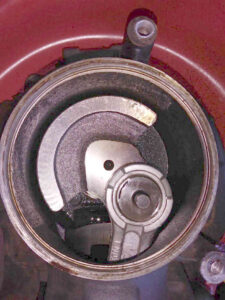 Above, the crankcase internal space was cleaned of grass and debris which had been inducted. 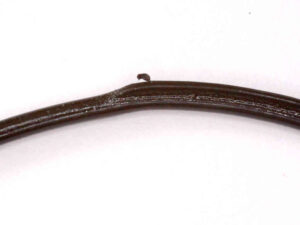 The large starter assembly o-ring had been pinched at three places around the o-ring and was not properly seated in the groove. Since crankcase leaks can result in lean mixture leading to hot seizure, a new o-ring was fitted. 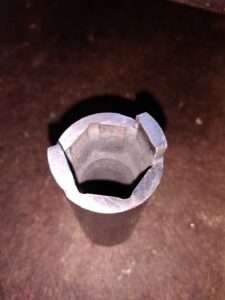 I have owned earlier Victas, and the very early ones were dangerous and rudimentary. The last Victa I owned was purchased in 1982 and used for just over 20 years with very little maintenance required.

The introduction of the L4/G4 carburettor really marked the beginning of Victa’s innovation, and this mower from mid to late 1980s is actually in pretty good fundamental shape (meaning bore and piston, compression, spark) but a host of problems, cracking of the carburettor end cap eventually stopping it (well, allowing it to overspeed dangerously).

I have a lot of small engines on yard tools here, zero Briggs & Stratton (and that is not by accident), one genuine Honda GX390, lots of Chonda GX200, lots of two stroke chainsaws, weed wackers etc. I rank the Victa lower than any of them (but then I do not own a Briggs & Stratton).

Anyway, it is not so much about liking them, I have repaired this one and with modest care, it should continue to give good service. In the modern world, whilst the parts cost for the repair was modest (<$100), the labor cost would be prohibitive and condemn a mower in this condition to the recylers. BTW, similar service for the Chondas would be much cheaper.