Viscous digi is a feature to reduce unnecessary digipeater transmissions. Upon receiving a packet, the viscous digi puts it in a hold queue for a configurable time pending hearing another digi repeat the same packet. If none are heard, then it is repeated as usual, otherwise it is discarded.

An experiment was conducted with viscous digi configured for 5s on VK2OMD-3 (which was also an iGate for the experiment). The tracker was running 65W to a roof mounted quarter wave and TT3+ with smart beaconing enabled

At all times, the two prominent digis were quite close, but operations were in hilly terrain.

The version of aprx tested was a custom hack of v2.08, see https://github.com/owenduffy/aprx. 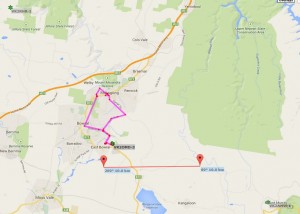 A test drive was taken as shown in the map above which includes the two local digis and VK2OMD-3.

It is estimated that around 10 posits from the tracker were not captured by any means, 48 unique correct posits were captured, so it is assumed that the total transmitted was 58.

VK2OMD transmitted 15 packets, so just 45% of those heard, the balance were heard from one of the other local digis.

In this case, viscous digi reduced the channel busy caused by the tracker, not a lot overall, but significantly for a low impact ‘fill-in’ digi.

aprs.fi showed that APRS-IS received 55 posits from various iGates, 33 from VK2OMD-3 direct,  11 through VK2RHR-1 as first digi, 4 through VK2AMW-1 as first digi and 7 corrupted records via various paths contributed by VK2YGV-5 (one of the most prolific posit corrupters in VK2).

Viscous digipeater is a useful facility for a low-impact “fill-in” digi, meaning a digi that repeats a packet only where it doesn’t see timely evidence that it was repeated by another (presumably Wide area) digipeater.

Though this test was conducted in concert with an iGate, that was done for data collection reasons and the appeal of viscous digi would be for a stand alone “fill-in” digi. There is good argument that an iGate does not need to repeat RF packets to RF to add to channel congestion.

Viscous digipeater is implemented in aprx.