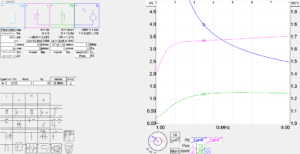 Above is the Simsmith model of a Fair-rite 5943000201 core (equivalent dimensions to FT37-43) with a 3t winding. Note this does not apply to Amidon #43 as their material is significantly different in characteristic.

So, will it work?

Well, anything ‘works’, it depends on your meaning of ‘works’.

There are two main questions:

Is the loss of power to the antenna a concern?

It seems that QRP aficionados are less concerned about loss of power to the antenna, QRP^2 if you like.

It is a personal matter.

Will the associated heat be an issue?

Above, the predicted temperature rise for the core in free air of just 0.1W of dissipation is 22°, so on a hot day at 40° ambient, the core would reach 62° which is just enough to burn skin.

The good news is that the average power of uncompressed SSB telephony is around 5% of PEP, so this core scenario should withstand that mode at up to 2W PEP, less for compressed speech.

If your choice was FT8, the core would get dangerously hot, and even reach the Curie temperature (where the core loses its magnetic properties) in time.

If the transformer is enclosed, its power rating is reduced.

I have had enquiries from hams about similar transformers on small #43 cores, FT82-43 matching transformer for an EFHW discusses one of the popular designs. It seems everyone is a designer, and adapting an often poor design by changing the core size is seen and an obvious path to success.

The promotion of these ‘designs’ speaks to the credibility of the ‘designer’.

What does work well?

There are several designs on this web site, start with Small efficient matching transformer for an EFHW.

Search the net for published designs that include exposition of the magnetic design, prediction of core loss, measurement of a prototype, and thermographs to validate the design performance.