A recent episode where the 170l gas storage hot water service relieved itself through the pressure / temperature relief valve sent me on a quest to understand the problem.

At the time, a ‘full rate’ discharge of 95° water was holding the valve open, and even with the gas turned off, the flow continued for some time until I closed the water isolation valve to let the system cool down.

So, was this simply a thermostat failure, temporary or permanent, or perhaps the result of ‘stacking’.

Stacking is caused by repeated very short draws of hot water, which cool the bottom of the tank near the thermostat, triggering heat input which can cause the top of the tank to reach temperatures considerably higher than the set point of the thermostat.

Another question that was of interest in choosing a replacement if needed, was how much heat is lost from the heater, what is the running cost of heat leakage alone.

The heater was allowed to reach ‘normal’ operating temperature and stabilise, and the gas valve was closed which would allow the unit to cool.

A variation on my IoT water tank telemetry project was configured to use a type K thermocouple and 4-20mA converter to provide a temperature logger, a type K thermocouple was inserted between the insulation blanket and tank at the top of the tank. The 4-20mA converter does not incorporate cold junction compensation, but the logger incorporates an ambient temperature measurement facility which will be used for approximate compensation. 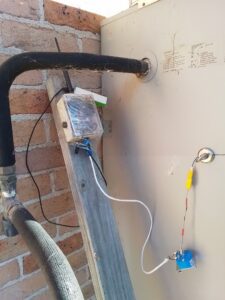 Above is the improvised data logger setup. 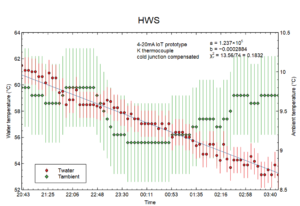 Above is a plot of the measured compensated water temperature and ambient temperature (outside air temperature or OAT) for reference (not the different scales).

A linear curve fit was made to the water temperature and noting that the ambient temperature was fairly constant at just under 6°, this is a reasonable approximation of the rate of temperature change at the observed temperature difference.

The average temperature difference (water to ambient) during this test is about 47.5°. The slope of the curve fit gives use the rate of change in temperature, and knowing the mass of water and specific heat of water, we can calculate the rate of heat loss.

The rate of heat loss depends on the temperature difference (water to ambient), and a simple model is to assume that it is simply proportional.

Doing that and pricing it up and current rates, the annual cost is about $300… just for heat leakage alone. It is more than half the gas usage.

Observation of the fault

The pressure / temperature relief valve vented 95° water some days ago, switching the gas off had no apparent effect, shutting the water supply valve stemmed the flow and over some hours the system cooled down and could be restarted and worked just fine… or it seems.

The temperature was measured adjacent to the pressure / temperature relief valve near the top of the tank. 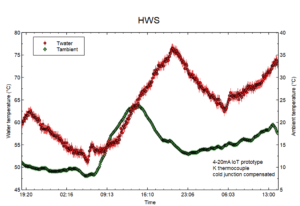 Above is a plot of temperature observations from gas switch on one morning for about 44 hours. Note that the two curves are to different scales.

It is reasonable to interpret this graph as indicating that the set point for the thermostat (located near the bottom of the tank) is a little less that the stable temperature temperature measured an hour after switch on, about 50° in this case.

The control system is able to keep temperature fairly stable for a few hours, but when hot water is drawn around lunch time, it seems to trigger an escalating temperature reaching 75° some 6 hours later. When the gas is switched off and the water allowed to cool down below 50°, it will start up and repeat the same behavior. This would appear to be stacking, and the likely cause of venting the pressure relief with 95° water a few days ago (set point at that time was 65°).

The thermostat is without doubt faulty, each time it is started and set to the same knob graduation, the observed temperatures vary widely. And then there is the creep, possibly stacking. It is not worth spending $200 on a new thermostat on a 28 year old HWS, it will be replaced with an instantaneous gas HWS which is a relatively low capital cost with reasonably good running costs… though one cannot guess where energy prices relative to each other will go over the service life of the thing. 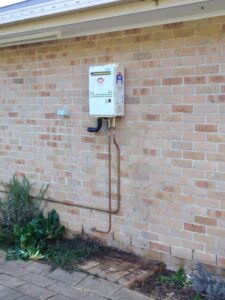