Increasing the available WIDE path length does expose a station’s packets to more iGates, but the average effect of everyone following that strategy is to literally exponentially increase channel busy as the available hops is increased.

So, how many hops is sufficient to have a high probability of reaching APRS-IS?

The answer is revealed by analysing an APRS-IS feed to find how many hops were used for submissions. The following analysis does just that, 5000 records filtered on source VK1 or VK2 were analysed and summarised in the following graph, 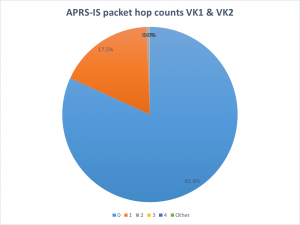 Above, the results of the analysis.

99.4% of submissions were via 1 or less digipeaters.

With the proliferation of iGates, it is no longer necessary to use long paths, in fact, overall it reduces the chances of a posit making it to APRS-IS.

You might ask why digis repeat packets that have already had one or more hops, so adding to congestion and degrading performance overall. 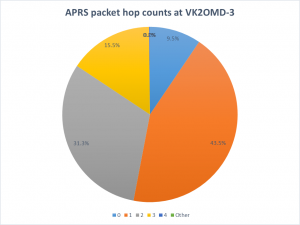 The above chart shows the distribution of traffic over a day (7000 records) at VK2OMD-3 by hop count, and almost half the traffic has more than 1 hop count. The channel is twice as busy as it needs to be!