A common topic of discussion on (tr)uSDX (trusdx) forum is problems in loading firmware (application or bootloader.

A user posting provides evidence for discussion of the problem in this case, probable cause, solution, and a better design to prevent the problem. 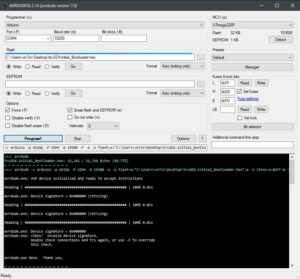 So, you might ask why a bootloader attempts to write to flash addresses that it knows will overwrite and probably corrupt itself?

I have written bootloaders that check that they are not attempting to do such a thing, but a better measure on the ATmega328P is to use the bootloader protection scheme by programming appropriate LOCK bits.

Robust designs use the LOCK bits to protect the bootloader.

The (tr)uSDX recommended procedure at https://dl2man.de/3a-trusdx-bootloader/ does not program the LOCK bits (for whatever reason), and it leaves the bootloader vulnerable to corruption by:

Because this is proprietary code (ie secret), one cannot examine the source code to find if there was a functional reason to leave the LOCK bits unprogrammed. They may have been left unprogrammed to facilitate some half baked serial number embedding scheme for instance? My first guess at the serial number scheme is that it uses the extended signature bytes ‘burned’ into the chip, but experiments show that the bootloader section gets modified after loading. 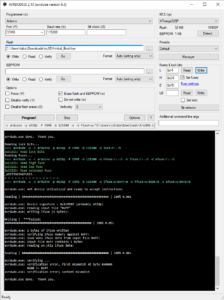 By now, the reader can analyse this. It is exactly the same problem as the previous user’s screenshot… but more revealing. 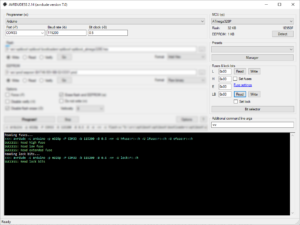 Above is a screenshot after trying to read FUSES and LOCK bits using the Arduino type programmer via Optiboot bootloader. All results are wrong. 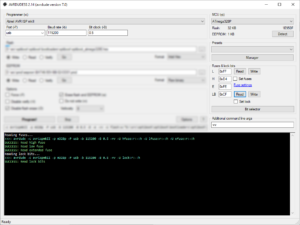 Above is the correct result obtained with an ISP programmer.

If you want to read or write FUSES or LOCK bits, use an ISP programmer. Take note of the clock rate issue raised at ISP programming of the (tr)uSDX.

The screenshot might well describe a method by which end users have corrupted the bootloader, an easy enough mistake to make, even for experienced users.

In my experience, a properly installed ATmega328P bootloader (one that passes read back verification AND is protected by the LOCK bits) never needs replacement (unless to upgrade it for enhancement or bug fix).

The fact that experts are advising users of the (tr)uSDX to reprogram the bootloader hints known bootloader corruption.

Continued at (tr)uSDX bootloader corruption – a smoking gun – an experiment.