A study of APRS traffic was conducted by analysing the log of VK2OMD-3, a VHF APRS ‘fill-in’ digi and iGate.

Note that any study that counts decoded packets underestimates channel utilisation as packets with errors as a result of interference, collisions, propagation are discarded in the decoding process.

The study was conducted shortly after VK2ASY ceased iGating his buddies to RF into the area via VK2RAO-1 and VK1RGI-1, that cessation roughly halved the area traffic. 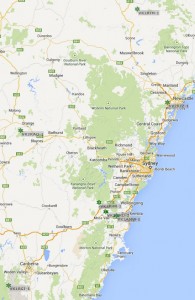 Above is the geographic topology. VK2OMD-3 is located about 100km SW of Sydney and does not directly hear Sydney or coastal traffic.

Two prominent local digpeaters (VK2AMW-1 and VK2RHR-1) each about 20km distant are heard very well, and one prominent distant digi (VK1RGI-1) at about 190km is frequently heard well, but subject to varying propagation conditions.

A significant component of traffic is fed into the area by three more distant repeaters, VK2RTM-1, VK2RTZ-1, and VK2RAO-1 which of course, source some of their traffic from other digis. VK2RTM-1, VK2RTZ-1 are a single hop to both VK2AMW-1 and VK2RHR-1. 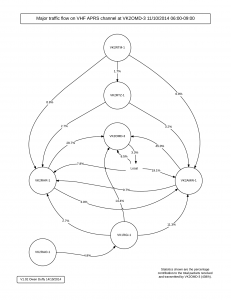 The flow diagram above charts the major traffic flow during the three hour sample period, 1315 packets in all, and average rate of 438/hr. For short periods of time, traffic intensity might easily be double that rate, and the intensity at the two local digis might approach double that again (the above counts are packets received at VK2OMD-3 and do not include those received at the local digis but not heard at VK2OMD-3).

The channel was very busy at times, busy enough to have significant collision loss and so this study underestimates actual demand.