This article compares the LTSPICE model data set, its curve fit, the measurements of Bruce’s implementation, and its curve fit. 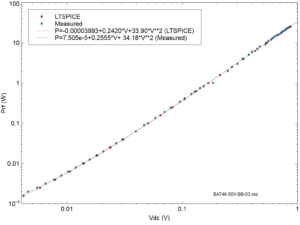 Above is a chart comparing all data series, and showing the curve fit formulas (rounded to four significant digits).

Above 0.01W, there is very little difference between them, but they start to diverge below 0.01W.

I would trust the measured dataset over the simulation, because at the very low signal levels, the diode current is almost sinusoidal with a very slight asymmetric distortion that gives it a DC component. Essentially, the diode current is dominated by the charge / discharge current of the diode’s capacitance, and behaviour is quite sensitive to the actual diode characteristic. 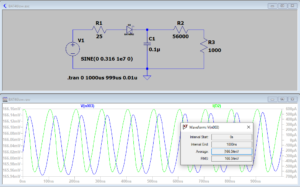 Above is a screenshot of the LTSPICE model with 0.316Vp drive (equivalent to 0.001W) to the detector. The green trace is of current through the diode D2. It looks almost sinusoidal, but if you look carefully, it is distorted, and it has a non-zero DC component (check it carefully, it swings +ve and -ve by very similar amounts). The blue trace is of the voltage across C1, and whilst there is a substantial amount of ripple, the DC component at 166mV is substantial. Note that the voltage measured by the ADC (ie across the 1kΩ resistor) is 166/57=2.9mV, lower than practically usable on this 10bit ADC due to quantisation noise.

This might challenge many people’s understanding of how a half wave detector works on small signals.