Nanosaver v0.4.0 contains a graph that I have found difficult to understand, much less find application. 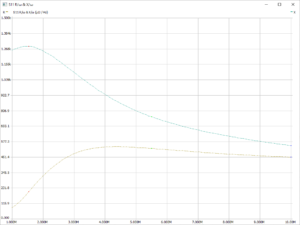 Above is the graph scaled R/ω and jX/ω, and an untitled X axis, though it would appear to be frequency in Hz (scaled by the M multiplier).

I had difficulty reconciling the Y values plotted for R/ω and jX/ω with the displayed R,jX values.

I add some explanations.

I asked Rune if he could add this graphic because it is very useful.
It display curves that have exactly the same shape as the complex permittivity curves (μ’r and μ”r) of the ferrite datasheets.

The values do not match those of the constructor curve ( to have the right value the software might know the exact geometry of the inductor) , but the shape is absolutely identical.

This allow to easy identify unknown ferrite core, and to better understand how to use it in a RF device.

He says permittivity… but he is talking about permeability.

The quote seems to say the Y axis scale is worthless?

In any event, the underlying R,X data only follows µ at frequencies well below the self resonant frequency (SRF) of the inductor.

I have a small ferrite cored inductor, 4t on a FB43-2402, which I will measure s11 from 1-10MHz. A marker was set at nominally 1.5MHz, it is actually 1.54MHz due to the scan set. Normallys one would use the least number of turns for good measurement, the 4t inductor happened to be at hand and suits this study.

Firstly, lets estimate the permeability of the core material. 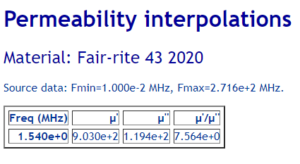 Note that ferrite has a wide tolerance range, and is temperature sensitive. 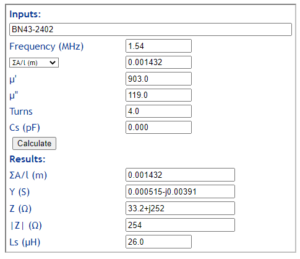 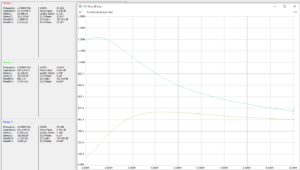 Looking at the first marker report at left, Z=31.4+j198. That is in the ballpark of estimate value of Z=32+j245, so the measurement looks valid.

Now lets focus on the graph of R/ω and jX/ω above. I have scaled values by eye and tabulated them along with the reported f,R,X values.

So, it does not look like the plotted values are actually R/ω and jX/ω at all, but the result of some untidy mathematics and a failure to test the solution, possibly all a result of the value of the underlying concept.

Recalling that the apparent inductance of a toroidal inductor of medium to high permeability well below SRF is \(L=N^2 \mu \sum \frac{A}{l}\) where l is the path length \(l=2 \pi r\), N is the number of turns and A is the cross section area, and noting for µ is a complex value for ferrite, so jωL has a real component which models core loss.

The quantity \(\sum \frac{A}{l}\) captures the core geometry, and it or transforms are often given in datasheets, eg Fair-rite often gives the inverse in /cm, \(\sum \frac{l}{a}\).

So as the quote states, the shape of the R/ω and jX/ω does follow that of relative permeability, but only well below SRF, and the constant of proportionality is \(\frac{1}{\mu_0 N^2 \sum \frac{A}{l}}\)

Is it a magic view (even if implemented accurately)? You decide.