A short test drive was conducted to evaluation APRS effectiveness in capturing a motor vehicle journey of about 30km. 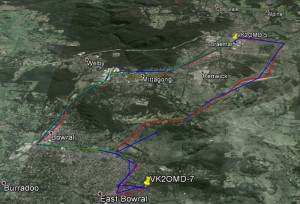 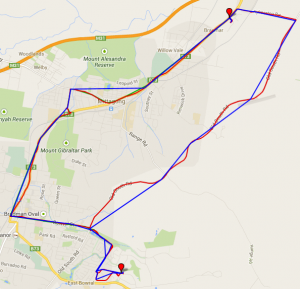 Above is an overall view of the test route.

The APRS radio used a TinyTrak 3+ set for smart beaconing with high report rate. APRS channel traffic was quite light, and therefore the probability of packet collisions was relatively low. Nevertheless there are signs of quite high packet loss.

For unknown reasons, the APRSdroid tracker silently stopped operating about half wave round the route. 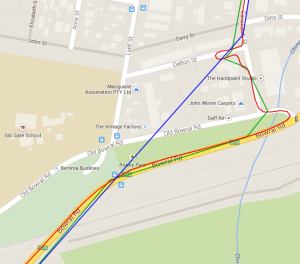 Above, the red track (2 second granularity) captures the vehicle path quite well, including a trip into a car park to collect morning tea. The green track is poorer, and the blue track is very poor. 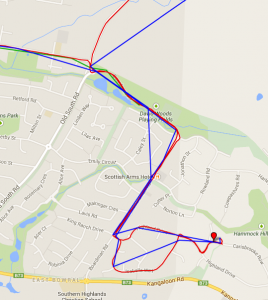 Another spot towards the end of the drive shows the abject failure of radio position reports, the blue track is very poor and a large number of position reports did not make it to APRS-IS.

You can view the map interactively and zoom in on interesting parts of the track, click on https://www.google.com/maps?q=https://owenduffy.net/files/AprsTest20140930.kml.

This is a quite limited trial, but in a lot of ways a real world evaluation.

Whilst APRSdroid outperformed the radio link most times it was operating, it silently stopped part way which questions its worth.

Both APRSdroid and APRS by radio provided a real time track to APRS-IS which could be shared by others in real time.