This article describes its calibration and use with a 40dB 50Ω 20W attenuator to make a 20W or 43dBm RF power meter.

Above is a pic of the system under test on a nominal 5W transmitter, indicating 37.4dBm, equivalent to 5.5W.

The attenuator pictured is an inexpensive nominal 40dB 20W DC-4GHz attenuator with N(N) and N(F) connectors, costing under $30 on Aliexpress (inc shipping). The attenuator is from the becenrf shop, they appear to be a manufacturer. Now it is low cost, but it is only good value if it works properly.

The connectors look very well made… but do they measure up? 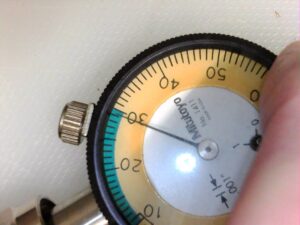 Above, the male connector scrapes in, nowhere near the precision N fit (the black rectangles near 0.008″). 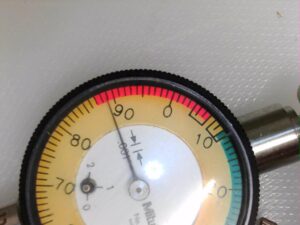 And the female connector scrapes in, again nowhere near the precision N fit.

The attenuator is labelled with a flimsy label over the fins, and it is unlikely to remain attached if the attenuator gets hot. More importantly, they do not label the input connector… these are usually asymmetric and only one end is rated for 20W, the other possibly 1W (though unrated here). An enquiry of becenrf has had no response after several weeks. 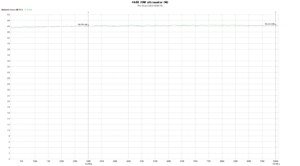 Above is the ReturnLoss looking into the male connector with a calibration quality termination on the other end. It is very good. 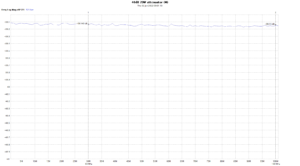 Above is |s21| measured with a NanoVNA, it is affected by the mismatch loss at Port 2, though insignificant (<0.003dB) based on worst case ReturnLoss measurement of Port 2 (32dB). Let’s take it at 39.13dB at HF, about 0.9dB low so it is not precision, but it is ok. The ReturnLoss of RFPM2 input port exceeds 30dB over this frequency range, so the uncertainty due to mismatch loss for that connection is insignificant (<0.004dB). The greatest contribution to uncertainty in the calibrated configuration is the underlying uncertainty of the AD8307 (see RF Power Meter 2 ).

Whilst this attenuator has turned out ok, I cannot recommend them or becenrf for reasons above. 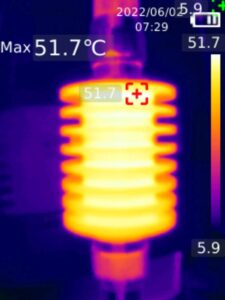 Above is a thermograph after 10min @ 20W, ambient is 6°, so 46° rise. The attenuator was horizontal in free air. At 20° ambient, the attenuator would become too hot to safely touch at this power level, but with caution, it is quite usable. 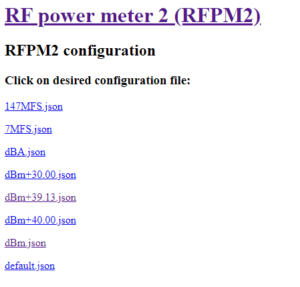 Above, the prototype has configuration files for may sensors, including current transformers, nominal and calibrated attenuators. In this case, the file dBm+39.13.json is selected, it calibrates for the measured attenuation.

The measurements are repeated continuously and reported on the LCD screen (dB value and bar chart), on the serial port, and a web server page. 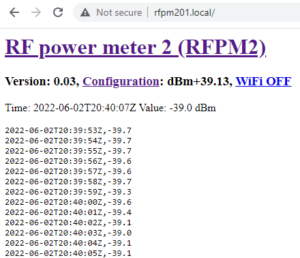 Above is a screenshot of the web server page, note the use of the .local domain, the v0.03 supports mDNS / Zeroconf networking.