Reviewing consistency of measured and model data, the first posting was based on an incorrect model parameter (aol), the article is now revised for the correct value, apologies.

Keep in mind that this is a desk design of a transformer to come close to ideal broadband performance on a nominal 2400Ω load with low loss. Real antennas don’t offer an idealised load, but this is the first step in designing and applying a practical transformer. 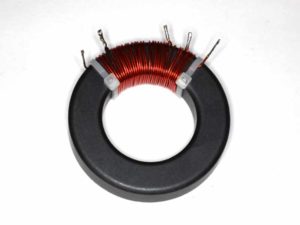 The transformer comprises a 32t of 0.65mm enamelled copper winding on a Fair-rite 5943003801 core (FT240-43) ferrite core (the information is not applicable to an Amidon core), to be used as an autotransformer to step down a EFHW load impedance to around 50Ω. The winding layout is unconventional, most articles describing a similar transformer seem to have their root in a single flawed design, and they are usually published without meaningful credible measurement.

This article presents a model of the transformer using the 1:49 taps, and measurements used to calibrate the model. 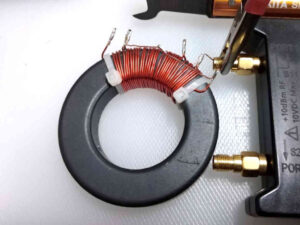 Above is a pic of the prototype being measured with a 2400+j0Ω load in a 4t:28t connection. Sweeps of the transformer with OC and SC terminations were also made, and all three used to calibrate the Simsmith model. 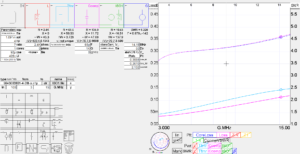 Optimal compensation capacitance on a real antenna may be a little different, pre prepared to measure and trim.

Above, worst expected core temperature rise in free air is at 14MHz,  about 51°.

Above, at 3.6MHz, expected core temperature rise in free air is a little lower at about 37°. 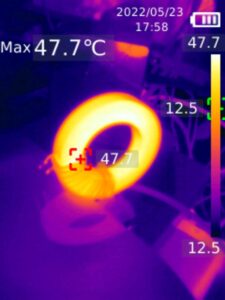 The core measured showed 35° in free air @ 100W through @ 3.6MHz suggesting it is probably best rated for no more than 300W continuous, perhaps less depending on the enclosure. These results are consistent with the measured impedance of the prototype, but it is wiser to use the model prediction of expected average characteristic of the cores.