One method described online on YouTube and in social media is the 90° method as I will call it.

The reason why people make measurements at +/- 90 degrees on the smith chart is because the measurement accuracy using the shunt configuration when trying to measure the nominal value of an inductor or capacitor is highest at 0+j50 ohms (or 0-j50 ohms… OD).

Does the software / firmware / hardware give significantly more accurate response under such a termination? 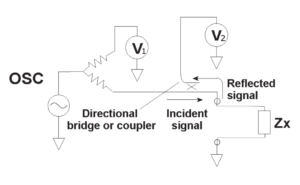 Above is a diagram from a HP publication, slightly altered to suit the discussion.

V1 and V2 denote points of measurement proportional to the forward wave and reflected wave, think of uncorrected \(s_{11} \propto \frac{V_2}{V_1}\). Remember that s11 is a complex quantity, having amplitude and phase.

Different circuits and test configurations mean that the propagation time from the V1 sensor via the directional coupler to the terminals (shown as small circles) and connecting wires to the component Zx, reflection back along the path to the directional coupler and then to the V2 sensor is significant. That propagation time is manifest as a phase delay proportional to frequency.

Realise that |V1| will usually be relatively high, but |V2| may be very low, usability limited by the noise floor. Some detector circuits have weaknesses in phase measurement, more so when V2 is weak. 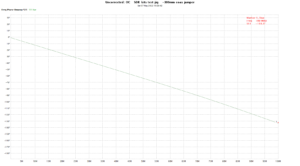 Above is a plot of the uncorrected phase of s11 from a NanoVNA with a SDR-kits test board OC termination and connected by about 300mm of RG400 coax to the NanoVNA.

In this case, |s11| is very close to unity, as it would be for measuring a high Q inductor or capacitor. Note there are no apparent glitches or even obvious noise on the measurement. There is no evidence of a range of phase of uncorrected s11 that should be avoided for accuracy reasons.

Now after calibration and application of correction, the phase of s11 above becomes approximately zero though the calibration frequency range.

If you were to connect a capacitor and find a frequency where the indicated phase of s11 is 90°, realise that the phase difference V2/V1 is larger, for example if that frequency was 50MHz, the phase of V2/V1 would actually be 90+63=153°.

Why would you restrict the instrument to measure equivalent inductance at only one frequency that might not be relevant to the application (equivalent series inductance is not a frequency independent characteristic)?

In any event, the phase angle of the raw forward and reflected signals as sensed is likely to be significantly different to a corrected display and attempts to optimise the phase angle actually sensed is incredibly naive.